Adam Caine is best known as a free-improvising guitarist, which makes his new quartet recording, Transmissions, somewhat of an outlier in his discography. Caine’s recent endeavors include The Damn Think (Chant Records, 2019), a conversational duet with innovative flautist Robert Dick; and Good and Evil (577 Records, 2013), a spontaneous meeting with drummer Federico Ughi, under the guise of The Moon. Previously, the Adam Caine Trio released Thousandfold (NoBusiness, 2009) and Pipe (TrueFalse, 2006), Caine’s recording debut.

This session boasts a unique multi-generational line-up: veteran drummer Billy Mintz; bassist Adam Lane; and guitarist Bob Lanzetti. Mintz, a living legend who has played with everyone from Lee Konitz to Vinny Golia, needs no introduction; his tasteful trap set work is understated but compelling. Lane is a stylistic peer to Caine, having also studied with Connie Crothers and Paul Smoker; his rock-solid timing, full-bodied tone and non-idiomatic improvising makes him the perfect bassist for Caine. Lanzetti, on the other hand, is a founding member of the Grammy Award-winning jazz/funk collective Snarky Puppy, whose aesthetic seems diametrically opposed to Caine’s often abstract approach. But Lanzetti also studied with Crothers, and isn’t afraid to venture into uncharted territory, making his meeting with Caine less unusual than it first seems.

The pensive “Night Driver” opens the set. A lyrical duet for the guitarists, it was originally written for a dance performance, as were several the pieces on this highly rhythmic album. With its focus on groove, the date often highlights the lissome work of Mintz, whose feature, “Cloud Over,” was written by Caine as a drum concerto of sorts, although Mintz doesn’t actually solo in a conventional sense, instead spurring on the guitarists’ tortuous exchanges. “Secular Expectorate,” features Mintz throughout, accompanied by guest saxophonist Nick Lyons, whose plangent alto blends with the drummer’s free-flowing extrapolations. Additionally, Mintz is the only soloist on the through-composed tone poem “Alien Flower,” which originated as a solo guitar piece.

Despite their differences, “Cloud Over” and “The Core” best demonstrate the versatile guitarists’ simpatico interplay. The ethereal swing and melodic variations of the former number contrast starkly with the thunderous riffing and scorching pyrotechnics of the latter. Upon further listening, Caine and Lanzetti share numerous proclivities, including a penchant for noise – a detail confirmed on the program’s longest, most radical inclusion, “Hell Awaits.” Punctuated by shards of warped distortion and oscillating electronics, the sludgy metallic dirge recalls the most extreme work of Caine’s trio. Conversely, the fuzzed-out funk of “The Spiral,” offers a lyrical finale, with crunchy fretwork by Caine that encapsulates the album’s appeal.

Caine, whose work is uncompromising and staunchly individualistic, has long toiled under the “talent deserving wider recognition” category. Transmissions covers a broad aesthetic range yet makes no obvious concessions to popular taste. The deep listening and heartfelt interpretations of his tuneful compositions by his bandmates yields a far more accessible sound than prior efforts, elevating Caine’s status beyond that of musicians’ musician. 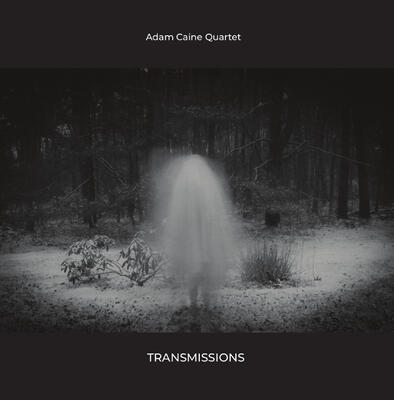