The Thing with Barry Guy - Metal!

SIDE B
1. PRASEODYMIUM
2. NEODYMIUM

With the Scandinavian trio The Thing having set itself up as improvised music’s version of the Rock power trio – albeit with a saxophone instead of a lead guitar – it’s instructive to note how well senior improvisers operate when entering into the band’s self-defined context.

Having established a mutually satisfying interchange with American saxophonist/trumpeter Joe McPhee, The Thing now uses this two-LP set to showcase the adaptations of British bassist Barry Guy to their sound. Guy, who founded the London Jazz Composer’s Orchestra in the 1970s, and is known for his collaborations with most top-rank European improvisers including tenor saxophonist Evan Parker, was involved in Free playing from around the time the Thing members were born. Since the early 1990s however, Swedish saxophonist and Thing member Mats Gustafsson has been playing with Guy in larger or smaller ensembles. Meanwhile on their own the other Thingers – Norwegians, bassist Ingebrigt Håker Flaten and drummer Paal Nilssen-Love – have racked up a history of affiliations with a cross-section of committed improvisers ranging from saxophonist Peter Brötzmann to guitarist Raoul Björkenheim.

Recorded in Vilnius, Lithuania, the 11 tracks on this CD demonstrate how easily Guy holds his own with the other three players. For instance “Lanthanum” initially creates a synapse out of Gustafsson’s intense flattement and diaphragm-forced snorts, Håker Flaten’s thumb pops, Guy’s rhythmic stopping and Nilssen-Love’s resounding clatters. As the saxophonist balloons his tone from stentorian to altissimo, drum beats multiply and cymbals reverberate as Guy responds with angled, sul ponticello scratches and strums. Meantime Håker Flaten’s tune extensions include measured pacing and banjo-like plinks, leading to a contrapuntal melding of bass tones.

“Europium” on the other hand balances tongue slaps from Gustafsson’s baritone saxophone with echoing plucks from Håker Flaten. After both string players engaging in a two-step of whining guitar-like picking, the baritonist’s guttural, splintered segments coalesce into droning pedal-point. When further variations in this broken-chord intermezzo are heard they expose simple drum-led time-keeping. Ultimately through the use of multiphonics from each player combine for a moderated ending.

Throughout enough space is apportioned so that each man’s technical prowess is on display. Guy’s plucks, rebounds and string ruffling, extended and doubled with tremolo slaps from Håker Flaten; as well as the drummer’s measured clangs on small bells plus tougher thumps on drum tops are some of the high points.

If there’s one vulnerable point nonetheless, it’s Gustafsson’s tenor saxophone. Dyspeptic slurps and pressurized snarls are impressive enough when he plays baritone saxophone, but when he turns to tenor, the staccato peeps, vocalized screams and bugle-like exclamation are an little too close to Albert Ayler territory to be totally satisfying.

Still as an extended example of how to integrate Heavy Metal and Free Jazz sounds, you can’t do much better than Metal! Plus the project incorporates a guest soloist, whose improvisation skills are embedded in an original interaction. 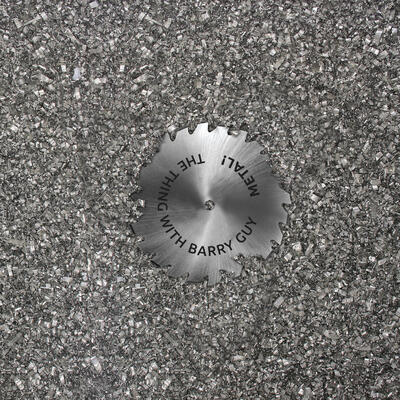