Side A
METTLE
BLOOS
BALLOON

Side B
SPOOR
ROGUE
KERKK

plus MOONS (available only in Digital version)

A really great setting for drummer Gerry Hemmingway – an album that has him improvising live with trombonist Samuel Blaser – a fantastic musician who's one of the freshest trombone talents we've heard in years! In previous comments, we've liked Blaser to a modern day heir to the genius of 60s trombonists like Roswell Rudd and Grachan Moncur – and those words definitely hold true here, as Blaser delivers a wondrous balance between new sounds and tuneful moments, fresh ideas and a longer tradition on his horn – all in ways that make Hemmingway sound even more creative than usual. The album features six duets, all recorded live in a church during a jazz festival in the Netherlands

Depending on the chosen measurement marker, free improvisation in its modern Western guise is now well over half-century extant as a means of musical inquiry. That longevity means that the days when pairings of instruments were considered radical or ungainly purely on the absence of measurable precedence are long gone. The tandem of trombone and drum kit may not be common, but examples are readily procurable. What remains singular is the pairing of Samuel Blaser and Gerry Hemingway with such instrumentation. OOSTUM documents on vinyl a concert between the Swiss and the American at Groningen, Netherlands in the summer of 2015. Six pieces, three to a side, serve as chapters in the amicable colloquy. The duo starts from near silence and the dynamics remain wide for the duration with Blaser tracing thematic fragments against a gliding wash of colors and textures from Hemingway. Bowed cymbals match and contrast with the metallics of plungered brass to build a striated horizontal structure of drones. Soon after, it’s mallets on toms vying with pursed, slide-driven murmurs in a loping processional. It being Blaser, there’s also a fair bit of humor as with the Doppler gutbucket shenanigans that color the Side A-closing “Balloon”. Instruments and their implementers prove an optimal match.

Oostum is a series of trombone and drum duets with Gerry Hemingway recorded in 2015. He and Blaser have been working in a number of configurations since the turn of the decade. For Oostum, recorded in a church in the Netherlands, free improvisation is the order of the day. Their rapport is obvious from the opening moments of this disc. “Mettle” seemingly begins with dynamic marking of “ppp”, slowly increasing in volume with Blaser blowing long extended tones and Hemingway bowing his cymbals, sounding like an electronic counterpart. “Rogue” finds Blaser building the piece through deft use of harmonics and mute work; Hemingway’s role consists of subtle but effective punctuation. “Kerkk” is probably the most straightforward piece once Hemingway sets up a steady pulse, Blaser blowing melodic phrases over the top to great effect. O 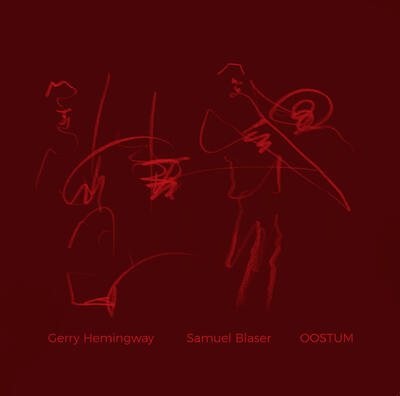