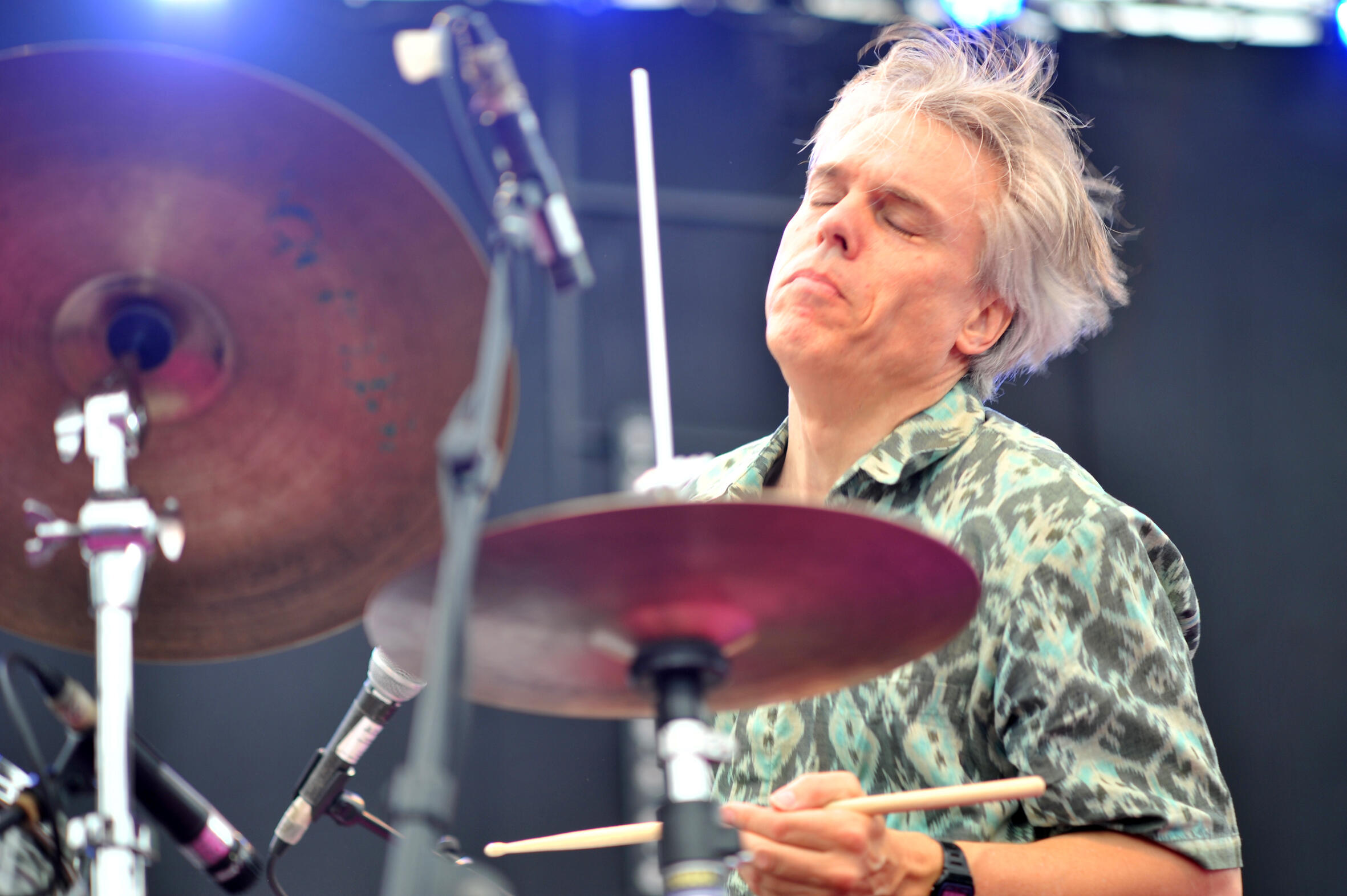 Composer/Percussionist/Visual Artist/Educator, has been at the forefront of creative music for four decades. He was born in 1955 in New Haven, Conn., to a family with musical interests (his grandmother had been a concert pianist and his father studied composition with Paul Hindemith). He became interested in drums around the age of ten and by the age of seventeen was working as a professional musician primarily in the jazz and bebop traditions. In the 1970's, New Haven was home for a number of interesting musicians. This was where Gerry met and first played with Anthony Davis, Leo Smith, George Lewis and Anthony Braxton. In the late 1970's, Hemingway, trombonist Ray Anderson, and bassist Mark Helias formed a collective trio which they eventually named BassDrumBone. The trio was awarded a grant from Chamber Music America on the occasion of their 30th anniversary in 2007 to compose a new set of works reflecting their then 30 year collaboration.

He joined and remained a member of the Anthony Braxton quartet for eleven years from 1983 - 1994. In 2007 he and Anthony Braxton had a historic reunion as a duo resulting in a 4 CD release on Mode/Avant entitled "Old Dogs (2007)". In the late eighties he began performing with the Reggie Workman Ensemble who at different times included Oliver Lake, Jeanne Lee, Marilyn Crispell, John Purcell and Don Byron among others. He was a core member of Anthony Davis' Episteme Ensemble, and has performed and recorded as a featured soloist on Mr. Davis' violin concerto "Maps" as well as the operas "Under the Double Moon" and "Tania" (released recently on Koch Classics). Hemingway also performed in duet with pianist Cecil Taylor in May of 1999 on the invitation of De Singel in Antwerp, Belgium.

A recipient of a Guggenheim Fellowship, Hemingway has become increasingly prominent as a composer and improvisor and a leader of several long standing quintets and quartets of international acclaim (see below). In addition to receiving fellowships from both the National Endowment for the Arts and the New York Foundation on the Arts, he has also received four commissions through the Parabola Arts Foundation with funding from the New York State Council on the Arts, including a 1998 grant supporting the creation of the "The Visiting Tank", which concludes his Tzadik release of "Chamber Works". In 1993, he premiered a commission from the Kansas City Symphony with funding from Meet the Composer for a concerto for percussionist and orchestra entitled "Terrains". In June of 1998 a co-composition with the Amsterdam based composer Guus Jannsen was commissioned by the NPS radio of the Netherlands and performed at the Holland Festival. Entitled "Cycles", the work used a unique computer controlled conducting system that allowed the ensemble to play in multiple tempos.

Between 1997 and 2007 his primary working band was a quartet with either Ray Anderson-trombone or Herb Robertson-trumpet, Ellery Eskelin-tenor sax and Mark Dresser or Mark Helias on bass. The band performed 40 concerts in the US in 1998 and it's first recording, "Johnny's Corner Song" was released on the Auricle Record label in March of 1998. The quartet completed a studio recording entitled "Devil's Paradise" which was released in May 2003 on Clean Feed records, who since also released "The Whimbler" (on CF) with Herb Robertson, Ellery Eskelin and Mark Helias (5/05).

This follows nine years of performances and recordings with his European based quintet whose final cd was released on GM Recordings in the fall of 1999 entitled "Waltzes, Two-Steps and Other Matters of the Heart". Previous recordings include, "Special Detail" (91), "Down to the Wire" (93), "Demon Chaser" (94) and "The Marmalade King" (95) all on the Swiss Hat Art label (all except "Demon Chaser" currently out of print) and "Slamadam" (95) and "Perfect World" (96) (both out of print - but still available from this site) on Random Acoustics. The quintet formation began a reactivation with new personnel and instrumentation and a performnce and recording in Lisbon, Portugal in the fall of 2002. A release of that material "Double Blues Crossing" was released in April 2005 on Between the Lines (whom has merged with SunnyMoon Records).

In 2008 A hybrid quintet formation was conceived with Ellery Eskelin (ala quartet), Oscar Noriega (multi-reed, ala quintet), Terry McManus (guitar, ala previous cello chair), Kermit Driscoll - ac & el bass. This has become the current working band with a recording entitled "Riptide" released on Clean Feed, and with occasional performances in New York and a tour in 2012 this group performs new repertoire as well as material from both previous quintet and quartet book. In 2012 Mr. Hemingway formed a mixed quintet combining the WHO trio - pianist Michel Wintsch, bassist Baenz Oester, as well as guitarist Terrence McManus, and original quintet member Michael Moore with multi reeds.

A significant part of Mr. Hemingway's body of work is represented in his work as a solo percussionist which began in 1974. His interest in extending the vocabulary of the instrument for the purpose of creating richly textured, vibrant and engaging compositions for the drum set have been previously documented in four recordings including "Electro-Acoustic Solo Works (84-95)" and "Acoustic Solo Works (83-94)" on the Random Acoustics label as well as the previous vinyl editions "Solo Works" on Auricle Records and "Tubworks" (now re-released on cdr) on the Sound Aspects label. Mr. Hemingway has been developing a new solo CD + DVD project for the past fifteen years which will weave together some of his more recent solo works and his work as a film artist as it relates to his solo percussion work. Release is scheduled for September 2011. He currently is performing a solo program entitled "Behaviors" in collaboration with video artist Beth Warshafsky with whom he has been collaborating since the late 80's. The program puts a collection of his new electro-acoustic solo works in a theatrical framework that includes video projection and real time interactive visual and sound work. A major new release of his solo work both as a drummer and electronic musician, combined with his visual art work as fimmaker was released on Auricle Records as a CD+ DVD in January of 2014 called "kernelings".

His work as a composer and percussionist includes recordings, collaborations and performances with Derek Bailey, Leo Smith, Oliver Lake, Kenny Wheeler, Frank Gratkowski, George Lewis, John Cale and Hank Roberts among many others. Collaborative trios include the GRH trio with German pianist Georg Graewe and the Dutch cellist Ernst Reijseger, the WHO trio with Swiss pianist Michel Wintsch and bassist Baenz Oester, and Brew with Reggie Workman and Miya Masaoka.

As well there are a number of ongoing duos including one with John Butcher which began performing duos in 2000, Tom & Gerry is another duo with Thomas Lehn who performs live analog electronics which began in 1997. In the fall of 2010 Mr. Hemingway released recordings of three more recordings of ongoing duo projects, a duo with guitarist Terrence McManus, a duo with saxophonist Ellery Eskelin and a duo with komungo player Jin Hi Kim. In addition the duo with pianist Marilyn Crispell continues after a long hiatus, and documented with a new release on Intact records entitled "Affinities". Another duo project is with vocalist Andrea Goodman known for her work with Meredith Monk. They released a recording on Ruby Throated Records entitled "Divine Doorways". His work for multimedia includes "Waterways", for multiple slide projectors, tape and percussion, as well as numerous ongoing collaborations with video artist/animator Beth Warshafsky.

The many facets of Hemingway's work as composer/soloist/collaborator/ensemble member can be heard on over 150 recordings from many different record labels, among them: Tzadik Records, Enja, Palmetto, Mode/Avant, Random Acoustics, Intact, Auricle Records, and Hat Art.

Between 2005 and 2009 Mr. Hemingway was part of the faculty of New School's "Jazz and Contemporary Music" program where he ran the Sound in Time ensemble and taught two different history classes, one in World Music History and the other in Contemporary Jazz and its Exponents, the latter of which focused on the music of the 1960s until the present. Both history courses were taught as multimedia lectures, incorporating audio and visual data including numerous fims Mr. Hemingway had collected to help intensify the experience of assimilating these important history topics. Since the fall of 2009 Mr. Hemingway has joined the faculty of the Hochshule Luzern in Switzerland where he is now lives and is based for the forseeable future. In this context Mr. Hemingway teaches drumming, improvisation, composition, songwriting, multimedia and history as well running a variety of workshops each semester.