American drummer Gerry Hemingway keeps options open on Grey Matter with fully developed but unobtrusive backing, His sounds range from padded plops to metered rattles plus extended spins, the better to blend with the understated keyboard comping and inside piano forays of French pianist Christine Wodrascka. Thus trumpeter/flugelhornist Jean Luc Cappozzo, whose output can be brassy when faced with a mercurial type like bassist Joëlle Léandre, also keeps timbres under wraps. But as with the others’ playing, there’s an underlying swing to his squeaks, growls and lowing which doesn’t have to be noisy to be distinctive.

That said the CD’s stand out track is its title selection. Cappozzo’s forcing of tremolo kazoo-like timbres from his horn is initially met with distracted thumps from the drummer and low-energy chording from Wodrascka, until a spark is somehow lit to the extent that the track excitedly climaxes with high-frequency keyboard clicks echoing alongside a flurry of extruding brass notes. The pianist who has matched wits with the likes of saxophonist Daunik Lazro, also brings her playing up to florid Cecil Taylor-like mode on “The Ghost Train”, rousing Hemingway to participate a rampaging race that has him triple popping his beats as the two Frisbee the theme from one to another.

Otherwise, especially on distinctive tracks such as the initial “Echappée Belle” and the concluding “Tanz Ende”, the three create in quiet cooperation. Tension is sustained through almost 11 minutes on the first track, as Cappozzo’s buzzing cries transform into harsh sputters, while the pianist backs him with a repeated phrase pushed to its lowest limit with pedal power. As for the concluding dance it’s a stop-start program balanced on Hemingway’s wood-block rhythms and Wodrascka’s off-handed swing so that the trumpeter’s werewolf-like cries are fully outlined. 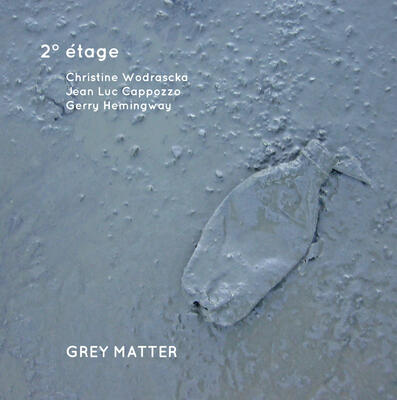