The Quietly Clouds And A Wild Crane

NoBusiness strikes back with another LP from the Chap Chap Series. This time is a live recording of the duo of Yuji Takahashi and Sabu Toyozumi, recorded at C*S*Aka Regna in Yamaguchi City in Japan in March 1998. Side A contains a wonderful suite in three movements "Lovely Silver 6,000 km". Side B contains a
single track "Shoulder Blade And Hip Joint". The combines free jazz at the highest possible artistic level with elements of free improvisation. Yuji's piano employs, obviously, traditions of Cecil Taylor or Alexander von Schlippenbach, yet is clearly very original and creative. He uses much more prepared and inside piano techniques, more typical for the contemporary classical music of John Cage. He employs also repetitive motifs, like in minimal music. The album as a whole is very interesting and dierent from anything I know.
Stuart Broomer - New York City Jazz Record
The Quietly Clouds And A Wild Crane is a duo performance by pianist Yuji Takahashi and drummer Sabu Toyozumi, recorded in Yamaguchi City in 1998 with both contributing additional percussion. The latter, who turns 80 this July, may be immediately familiar to enthusiasts of free improvisation from his recordings with significant figures in Western free improvisation; the Chap-Chap series includes duos with Swedish saxophonist Mats Gustafsson, late British trombonist Paul Rutherford and trumpeter Wadada Leo Smith. A student of Iannis Xenakis, Takahashi, now 84, is both a distinguished composer, whose work ranges from protest songs and classical genres to electronic music, and an outstanding concert pianist who has recorded works from Bach, Satie and Schoenberg to Rzewski and Takemitsu. His Messiaen recordings include Visions de l’Amen for two pianos with Peter Serkin.

The breadth of those collective associations comes through strongly in the program, two extended improvisations entitled “Lovely Silver 6000 km” and “Shoulder Blade and Hip Joint”, the former approaching 34 minutes, the latter 30. Dreams or dances, sometimes expressionist, sometimes impressionist, they are suffused with a kind of light, whether it is the contrast of rhythmic patterns that Toyozumi builds from the different elements in his kit to the way Takahashi, at one point, contrasts dense and dissonant clusters in the bass register with sparkling consonance in the treble.

That the various titles suggest both impressionism and immediate physicality is entirely in keeping with the music’s bright complexity and rich playfulness. While Takahashi can throw off fractured runs with the lightness of water drops and flower petals, Toyozumi matches that with a passage on “Shoulder Blade and Hip Joint” making extended use of birdcalls, whether accomplished with sheer oral technique or a dedicated device. 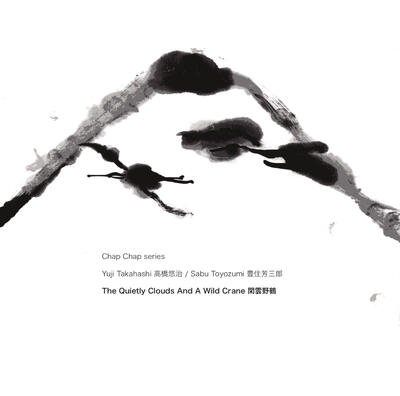