Side B
YOKOHAMA YAMATE TOWN

Working outside of this circumscribed area, Takagi’s playing moves on to another order of magnitude. On Live at Little John, Yokohama 1999, Takagi is featured on tenor with drummer Shota Koyama and two wind players one generation younger: Susumu Kongo and Nao Takeuchi. Respectively playing alto and tenor and both doubling on flute and bass clarinet, they will be names known only to specialists of the Japanese scene but are nevertheless excellent musicians. The liner essay indicates that Kongo is also a noted repairman and that Takeuchi has been a student of both Takagi and Byard Lancaster. There are several outstanding moments in the 40-minute opening piece, but Track Two is the stunner and gives an accurate idea of the overall dynamic. It opens with tenor underscored by low bass clarinet tones held through circular breathing. A short cyclical motive signals the move into another phase, which could be described using the vocabulary applying to classic free jazz buildups. But here, gradually increasing intensity does not proceed from cumulative playing merging into a single sound mass; it results from an explosive amount of multidirectional melodic and rhythmic invention from the three horns, all playing simultaneously, but with impressive delineation. As on most of the tape, Koyama’s drumming remains economical and supportive. Elsewhere, Takagi has also taken the uncommon step of approaching U.S. free jazz in terms of repertoire, playing pieces by Ornette Coleman, Charles Tyler, Steve Lacy or the Art Ensemble of Chicago. This piece reaches its conclusion as if following the classic organization of jazz performances that still figured in the music of the early American pioneers, returning to the opening statement, calmly and with perfect balance. This is mature music that uses the best of what had been uncovered during the long and convoluted history of free playing. It is also, importantly for an archival release, not music heard before. Takagi died three years after this performance.

The newest entry in the Lithuanian NoBusiness/Chap Chap Records series is another archival gem. This time out, they rescue a three reed and drummer quartet recorded live in 1999 at the tiny Little John jazz club in Yokohama, Japan. The best-known member of the group is tenor player Mototeru Takagi who was part of the 1970s Japanese free jazz scene, playing in groups led by Masahiko Togashi, Motoharu Yoshizawa, and Masayuki Takayanagi. Takagi also collaborated with Derek Bailey when the guitarist visited, their duo documented on the NoBusiness release Live At FarOut, Atsugi 1987. Reed players Nao Takeuchi and Susumu Kongo and drummer Shota Koyama are from a younger generation and are less well known outside of Japan. Over the course of the 75-minute set captured here, Takagi’s tenor is complemented by Takeuchi who switches between tenor, flute, and bass clarinet and Kongo who augments his alto with flute and bass clarinet. The three horn players play with an unfettered freedom, wrapping lines across each other over the spare undercurrent of Koyama’s drums.

The danger in horn-heavy settings like this is that they devolve into brawny cutting sessions. But these three are canny collaborators willing to push without playing over each other. The complement of registers is played to distinctive advantage as the two younger players seamlessly switch between horns. There’s a particularly strong section midway through the first 40-minute improvisation where Togashi leaps to the upper registers of his tenor, countered by low bass clarinet grumbles and breathy flute exclamations anchored by Koyama’s open rolling toms. As the piece winds its way from there, the reed players chatter across each other, building densities and then opening up for various solos and duos, pulling it all together for a quiet resolution.

The second improvisation, at 12 minutes long, starts with an incantatory tenor solo over a low bass clarinet drone. A third of the way through, tensions start to build as the tenor digs to burred, gravelly low end and bass clarinet and alto pick up phrases from the darkly lyrical theme, buoyed by the free stutter of snare and cymbals. The closing 20-minute piece starts with a strident flute solo joined in by a second flute as the two dart across each other in briskly acrobatic swoops and cries. Koyama enters in with percussive slashes, setting the stage for Takagi’s supple tenor entreaties to enter the mix. The improvisation proceeds with a measured sense of arc as the various members duck in and out, leaving plenty of collective room. About two thirds of the way in, there is a lull as Kongo and Takeuchi switch to saxophones and the piece charges off to a torrid conclusion. Kudos as usual to NoBusiness and Chap Chap for continuing to unearth this music, presenting the fertile Asian free jazz scene to a broader audience.

Abandoning chordal instruments and concentrating on horn textures, Live at Little John, Yokohama 1999 (NoBusiness NBCD 144 nobusinessrecords.com) provides an alternative variant of Nipponese free music. Backed only by the resourceful drumming of Shota Koyama, a trio of wind players creates almost limitless tonal variants singly, in tandem or counterpoint. Best known is tenor saxophonist Mototeru Takagi (1941-2002), who was in Takayangi’s New Direction Unit and in a duo with percussionist Sabu Toyozumi. The others who would later adopt more conventional styles are Susumu Kongo who plays alto saxophone, flute and bass clarinet, and Nao Takeuchi on tenor saxophone, flute and bass clarinet. No compromising of pure improvisation is heard on this CD’s three lengthy selections, although there are times when flute textures drift towards delicacy and away from the ratcheting peeps expelled elsewhere. Whether pitched in the lowing chalumeau register or squeaking clarion split tones, clarinet textures add to the dissonant sound mosaic. This isn’t anarchistic blowing however, since the tracks are paced with brief melodic interludes preventing the program from overheating. The more than 40 minute Yokohama Iseazaki Town gives the quartet its greatest scope, as vibrating split tones pass from one horn to another with percussion crunches keeping the exposition chromatic. Takagi’s hardened flutters and yowling vibrations may make the greatest impression, but Kongo’s alto saxophone bites are emphasized as well. Although space exists for clarion clarinet puffs and transverse flute trilling, it’s the largest horn’s foghorn honks and tongue-slaps that prevent any extraneous prettiness seeping into the duets. Still, with canny use of counterpoint and careful layering of horn tones backed by sprawling drum raps, the feeling of control is always maintained along with the confirmation of how the balancing act between expression and connection is maintained. 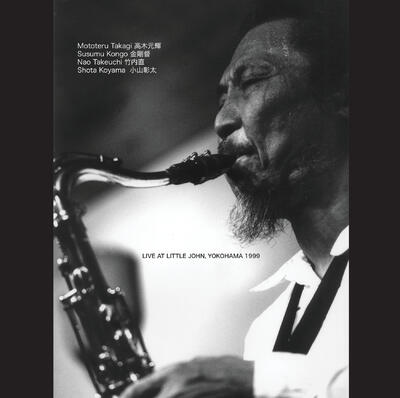