Trio and Duo in New Orleans

“There are few left playing to whom the term ‘master’ can be applied without reservation,” proclaims Marc Medwin at the outset of his booklet note for the 2-CDTrio And Duo In New Orleans. By “master,” Medwin is not referencing craft, style or technique like others who bandy the dime word. If anything, there’s a surplus of such craftpersons in jazz, measurable through the dozens of CDs issued each month that are tightly joined, well sanded and inert. Instead, Medwin means elders, venerated teachers of life as well as music; but therein is the assumption of an insufficient number of middle-aged artists surviving to the ripe age of tenor saxophonist Kidd Jordan and drummer Alvin Fielder – the jury will be out on that count for some years. Still, “masters” is the right instinctual response to Jordan and Fielder’s duos and their trios with gone-way-too-soon bassist Peter Kowald. Long before it is is heard as the development of motives, the confluence of traditions, or any number of constructs that account for the intangibles inherent in improvisation, their music is a sheer, enlivening, superlatives-prompting force.

The nuts and bolts: The trio concert occurred in 2002; except for the concluding track, which is taken from a 2012 Houston gig, the duets are from a studio session that took place a few months before Katrina. The concert sound is solid; the small details of Kowald’s agile solo being whisked by Fielder’s brushes are as vividly captured as the trio’s most robust passages. The studio session pays similar attention to detail; there are moments when Jordan seems to time his breathier phrases with the decay of Fielder’s drums, and Fielder is just a nano-second in following Jordan’s frequent, unforeseen change of attack, register and tone. The consistency in Jordan and Fielder’s resourcefulness and hand-in-glove rapport is particularly remarkable, given that the collection spans almost a decade. Their welcoming of Kowald is palpable – a joy to behold. Having seen Jordan and Fielder at after-fest sessions at Constellation in Chicago over Labor Day 2013, it is obvious that they love to play; constantly shifting and mulling each note from each musician, their total engagement and focus was inspiring. That’s what you hear on Trio and Duo in New Orleans. 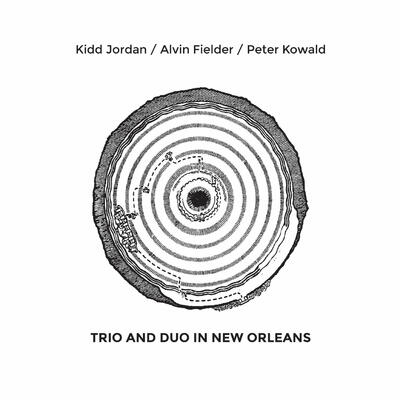