This disc features two sessions, a seven piece German avant/jazz ensemble recorded in July of 1971 and three of the members recorded 16 years later in July of 1988. The personnel includes Hans-Jorg Hussong on bari & soprano saxes & compositions, Wilfried Eichorn on bass clarinet & tenor sax, Andreas Boje on trombone, Erich Schroder on viola, Helmut Zimmer on piano, Matthias Boje on double bass and Rudi Theilmann on drums. The wonderful FMP label (Free Musik Productions) did a great job of documenting the German Free Music Scene from the early 1970’s onwards. No doubt we all know the bigger names like Peter Brotzmann, Alex von Schlippenbach, Peter Kowald, Fred Van Hove, Hans Reichel, as well as other musicians from neighboring countries, the UK & the US, if they were collaborating with their German brethren. Aside from those bigger names, there were also a large number of lesser recognized players who are/were worthy of larger recognition: Rudiger Carl, Gunter Christmann, Ulrich Gumpert, Sven-Ake Johansson and many others. Occasional a session will be released of a musician or group with whom I know little of nothing about previously. Like this one. The septet session here, which makes up 2/3rds of this disc features some relatively obscure musicians. The only name here that the DMG listed previously is trombonist Andreas Boje, who is a member of the Berlin Jazz Workshop Orchestra and can be found on three early disc from FMP. The name Total Music Association refers to a series of avant-garde art exhibitions and music happenings which took place in Heidelberg, Germany in the early 1970’s. Hans-Jorg Hussong wrote all the music for the septet session here and also plays in the trio some 16 years later for an improvised session. The septet session is a studio effort and was released as an obscure private release way back when. “Walpurgisnacht” opens this disc with a powerful, focused yet free-sounding, superbly recorded happening, Euro-Free/Jazz at its best. The writing here is consistently fascinating. Several layers are often criss-crossing, with tight-knit interaction going on simultaneously. As one person solos, another layer (horns, strings & piano) will erupt with fragments interspersed amongst different segments of the septet. The production is also well-balanced throughout, recalling some of the better sounding Euro/Free Music dates from the same era (like Keith Tippett’s ‘Dedicated to You But You weren’t Listening’ or any of the Brotherhood of Breath studio dates). Considering that most of us know so little about any of the members of the septet, I must admit that this is a masterwork of progressive jazz! 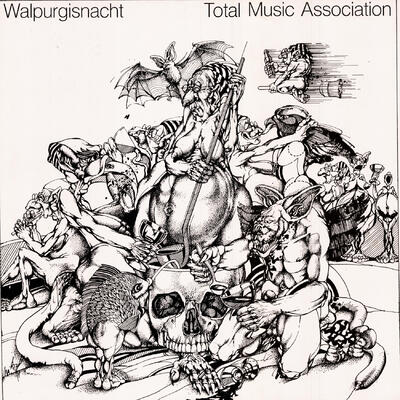