After attending dozen of jazz gigs at places like the Village Vanguard, the Village Gate and the Five Spot, starting in fall of 1972, I went to hear music in loft spaces throughout the rest of the Seventies. Places like Studio Rivbea, Ladies Fort, Environ, the Brook & Studio We. There was a large influx of musicians moving to NY then and many of them played at and ran those loft spaces. I remember catching a group called Interface at Environ on several occasions, whose members included Perry Robinson on clarinet, Mark Whitecage on sax, John Fischer on piano & Phillip Wilson on drums. I also caught Perry Robinson with Gunter Hampel’s Dream Galaxie Band. Mr. Robinson was the first clarinetist I heard that played freely. I was also buying records and finding out about more and more creative musicians and scenes, locally and elsewhere. I recall finding albums by a vibes player named Bobby Naughton, who was collaborating with future heroes like Anthony Braxton, Wadada Leo Smith and James Emery. I bought a number of albums led by Bobby Naughton and Wadada Leo Smith during the seventies but never got a chance to hear him live until the last few years and the Vision Fest (with WL Smith) and once in the early days of Victo with Mr. Braxton. I bought a copy of Bobby Naughton’s ‘The Haunt’ way back when it came out but haven’t heard in more then thirty years. Until this reissue. What I find most interesting about this music is that it sounds more like chamber music, refined, most carefully arranged and exquisitely played. Mr. Naughton claims that he wrote the music mostly at the piano which he played before playing the vibes. The sound of his vibes are slowed down, dreamy and filled with soft drones. (Pre Wadada) Leo Smith’s trumpet and Perry Robinson’s clarinet also play with a dream-like haze, bending their notes together with the utmost restraint and care. Since most of this is slow spacious and calm, we must settle down and wait as thing s unfold. Is this music from another time (April 1976) and place (Blur Rock Studio, NYC)? Certainly, but it is also music that is timeless, ageless and special. Mr. Robinosn seems to have one foot in the past and the other in the present or future. He will start off by bending a note the way some one does on more ancient jazz records when swing was the thing in the forties and then play with a more modern tone as he and Smith become one sound/blend. The title of this disc, ‘The Haunt’ seems most appropriate since the music is most haunting. The final piece, which is also a bonus track and an alternate take of an earlier piece is perhaps the best one one s the trio take off and increase the level of intensity, spinning more quickly, the level of ingenuity, a marvel to behold. This will take some time to fully absorb since it appears to me a unique gem outside of its time.

The Haunt, a 1976 trio recording led by vibraphone player Bobby Naughton with Leo Smith (before the trumpet player appended Wadada to his name) and clarinetist Perry Robinson. Naughton honed his music skills as a rock keyboard player in the ‘60s, eventually settling in Connecticut. It was there that he began listening to free jazz courtesy of his band manager’s record collection. By the late ‘60s, Naughton had sold his keyboard, bought a vibraphone, and dove deep in to George Russell’s Lydian Chromatic Concept of Tonal Organization, which proved an indelible influence on his playing and writing for improvisers. Coming to vibes from playing keyboard, rather than percussion, additionally influenced his chromatic approach to the mallet instrument.

Trips down to New York around that time united him with like-minded players including Perry Robinson, Mark Whitecage, Mario Pavone, and Randy Kaye, musicians he would go on to play with in to the 1980’s. In the early ‘70s, Naughton connected with Smith, who had relocated to New Haven and the two became close friends, linking him in to the then-burgeoning improvisation scene in Connecticut including musicians like Gerry Hemmingway, Dwight Andrews, and others. This led to the formation of The Creative Music Improviser’s Forum (CMIF), an important musician-led collective that hosted concerts of creative music throughout the state. It was these working relationships that inspired Naughton to form his OTIC label, which produced six recordings between 1969 and 1983, documenting ensembles, his vibes/bass/drums trio, a solo, and The Haunt. Unfortunately, by the mid-‘80s, Naughton was worn out from the hustle of eking out a living from his music and moved to Providence, RI, earning his living as a locksmith.

This reissue shows just how much of a shame that was. In 1976, Naughton received a grant to compose music for two different trios. One was a trio with drums and bass where he concentrated on the subdivisions and contrasts of time. The other was built specifically around Robinson and Smith, with a focus on harmonic interaction. Robinson’s distinctive clarinet playing suffused with an abstract, structuralist sense of melody and swooping lissome phrasing has never quite gotten the attention it deserves. Smith, at this point, was honing and documenting his thoughts about “new world music” in writings and recordings on his Kabell label and this highly personal refinement toward the placement of sound in silence provided the perfect balance to Naughton and Robinson.

The recording kicks off with the title tune with each of the musicians placing motivic, freely melodic kernels with congruent, countervailing trajectories. The balance of the timbres of clarinet, trumpet, and vibes proves particularly effective in Naughton’s open sound-forms. Each of the members imparts complementary shadings to the overarching ensemble sound while standing out within the collective. While it is great to hear Robinson and Smith in this context, Naughton’s harmonic sensibility and deft attack are a particular standout. The leader’s four other originals (along with an alternate take of one) provide provocative structures for interaction, from spirited, darting angularities to spare, resonant abstract lyricism. In each, all three seize on the core materials, digging in while keeping an astute ear to the fundamental group balance of the pieces. Particular standouts are the spiky “Slant,” which gets two readings, as well as the free sonorities of “Ordette” which flows organically from group statements to solo sections with ruminative poise.

It’s great to have this one back in circulation again. Naughton, now based in Vermont, is playing with Smith again so maybe another chapter is in the making.

Naughton may not be a household name in jazz, but he is a highly respected figure in avant-garde circles and this fine session makes it clear why. It is a minor classic, a notable example of the richness of composition that exists within free improv, as well as the beauty that can be created by studied and precise combinations of timbre. Indeed, sonically, this is music that scales sublime heights on occasion as the entwining of vibes, brass and reed has a hazy melancholy that is deeply redolent of the early years of jazz – a virtual meeting of Hampton, Eldridge and Goodman – as well as the more austere detachment of some areas of its evolution. Naughton’s compositions are spacious and uncluttered in the extreme. Furthermore, the frequent breakdown of the band to a duo, as well as the understatement of the players, ensures that the themes, improvisations and overall interplay stand out like gemstones in a mosaic. Naughton and Smith were both in the short-lived CMIF – Creative Music Improviser’s Forum, a non-profit organisation based on the AACM – and their chemistry flows into the session, where the glassy, airy waft of the vibraphone and the heavier swell of the horns grace both lyrical choruses and abstract tone poetry.

Experiments in free-form sounds were spreading outwards from New York and Chicago all during that time, and 1976’s The Haunt documents the now almost-forgotten New Haven scene. Ironically, although Connecticut-based clarinetist Perry Robinson was from New York, and trumpeter Wadada Leo Smith, an AACM linchpin, a Chicago expat, local vibraharpist Bobby Naughton was the third trio member and composed all the tunes. Stripped to chamber improv, the six tracks don’t suffer from lack of conventional chordal or percussion timbres, since Naughton’s just-in-time steel bar resonations purposely and craftily fill any gaps left from the sonic contrasts among Smith’s heraldic open-horn keens and Robinson’s abstruse glissandi or whinnies. While gorgeous trumpet story-telling on tracks such as “Places” moves with contrapuntal injections from shrill clarinet pitches from polychromatic expanse to uncomfortable abstraction, mallet-chiming pops prevent this. Instead shimmering vibes tones help assume a forward-moving group pulse. Skillful in adding diaphanous, but not delicate, mallet strokes that ring like toy piano keys; or adding extra weightiness by striking while diminishing the motor speed, the vibist’s skill and The Haunt’s individuality is highlighted on the concluding “Ordette”. With calm mallet-on-metal strokes preserving the narrative, textures resulting from blending Robinson’s note spews and Smith’s graceful slurs are now harmonized, moderated but no less powerful on this disc recorded a decade after Sound  (Delmark DE 4408).

Throughout the ‘70s and most of the ‘80s vibraphonist Bobby Naughton, who turns 75 this month, was an extremely productive and creative musician. During the ‘70s, he released five albums on his OTIC label and appeared in groups and on recordings of Wadada Leo Smith, Anthony Braxton and Roscoe Mitchell. He was also a prime member of the Creative Music Improvisers Forum, a New Haven-based collective that included a Who’s Who of musicians based there at the time: Smith, pianist Anthony Davis, bassists Mario Pavone and Joe Fonda, drummer Gerry Hemingway and others, several of whom appeared on the aforementioned OTIC albums. But by the mid ‘80s, Naughton became tired of the scuffling involved in a music career, moved to Providence, R.I. and pursued other activities, yet maintained a website that offered his recordings and very occasionally performed in public. The Haunt is a prime document of exploratory mid ‘70s jazz. It showcases Naughton’s strengths as a composer, instrumentalist and group leader. He assembled a trio with Smith and clarinetist Perry Robinson (who passed away last December at 80 and was on an earlier OTIC album, Understanding), both of whom were, by then, mature musicians and each performs beautifully, essaying aughton’s five compositions with lyrical grace and incisive abstraction. Naughton’s compositions are distinctive, each revolving around trio interaction. The title track has a stately theme with parts for all three players weaving around one another. “Slant” is a puckish line, slightly off-kilter, and a springboard for simultaneous group improvising. At the end of the disc is included a previously unissued alternate take of this piece that is worth hearing; it is taken at a slower, more measured tempo and shows how this group worked at these compositions. “Rose Island” is a carefully constructed piece where each member fits tightly within the framework. The closing “Ordette” is the most overtly melodic piece and its lyricism is tempered with abstraction. Throughout Smith etches his lines with clarion calls and muted burnished strokes while Robinson’s limber clarinet slithers around like a slippery eel yet always ending up in the right place. Naughton falls somewhere between Walt Dickerson with languid, flowing lines and mid ‘60s Bobby Hutcherson via an abrupt percussive attack. But these influences were folded into a distinct style that made him one of the most unique players of this period. It’s admirable that Naughton’s compositions are not necessarily vibraphone-centric. He seems more concerned with group interaction. If anything his vibraphone work is the most subtle element of the music. But when one focuses on it, the listener is amply rewarded with complex harmonies, which provide an inimitable textural backdrop. Naughton clearly is a master of the instrument. It’s great to see The Haunt reissued. It’s a lost gem that deserves to be restored to its rightful place as one of the best jazz albums of the ‘70s. 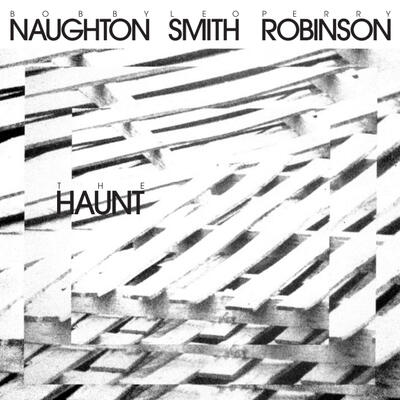