Side A
GIFT I

Side B
GIFT II
GIFTIII

The Gift is a recording of the contemporary trio of brothers trombonist Conny Bauer and double bassist Matthias Bauer, and drummer Dag Magnus Narvesen performing live in Berlin in July of 2018. The dynamic within this trio is very much driven by both Bauers acting as coequal lead voices. Matthias is heard mostly on bow, which allows his instrument to project its sound all the more effectively alongside of Conny’s bright, brassy horn. Indeed, Conny plays with an assertive, forward tone, but the soliloquy with which he opens the second piece develops out of an inward-turning, meditative mood. Matthias’ own solo work is meticulously honed and especially exciting when pushing back against Narvesen’s support. The latter is a key element within the mix; he is a remarkably sensitive and inventive colorist whose muscular playing raises and lowers tensions as the music’s emotional trajectory demands. An excellent unit and an engaging recording. 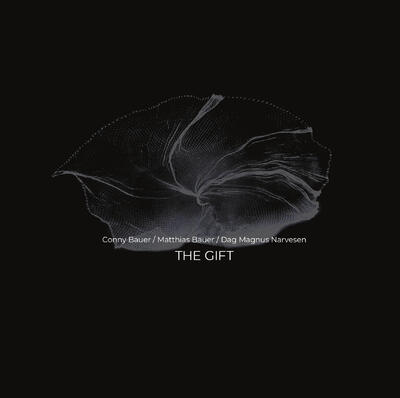