Tenor saxophonist Rodrigo Amado is one of a number of unique voices to have emerged from the vibrant Portuguese scene to stake their claim in the wider international arena. The Field forms the latest in a series of collaborations he has undertaken with his longstanding Motion Trio comprising compatriots, cellist Miguel Mira and drummer Gabriel Ferrandini. But where previous recorded encounters have featured a garrulous second horn in either trombonist Jeb Bishop or trumpeter Peter Evans, which furnishes a potent contrast to Amado’s burly probings, here he hooks up with veteran German pianist Alexander von Schlippenbach whose approach is more complementary. By so doing he demonstrates that it’s not only opposites that attract. Both show a predilection for manipulating motivic figures, cell-like phrases which they repeat, mutate, and evolve. And when they do so in tandem, their lines on related but separate trajectories which converge and diverge unexpectedly, generating an almost continual state of tension, the effect is intoxicating. Schlippenbach of course is well versed in sharing the bandstand with strong-willed saxophonists, not least through his 50-year odyssey with Evan Parker as part of his Trio. But in addition, he supplies a certain formal quality derived from a composer’s ear of such focus that he is able to introduce structural principles from New Music into his improvisations, as he did on the two volumes of his solo Twelve Tone Tales. Certainly what Schlippenbach plays when Amado catapults into full flight is far too substantial to be termed comping. As did Cecil Taylor in his ensembles, he constantly both feeds potential new material and reflects back what he hears. Right from the off Schlippenbach paraphrases Amado’s initial cries, as if responding to the saxophonist’s call, before both snag on a repeated note, en route to the first of many dramatic peaks. Also shaping the unfolding narrative, which encompasses meditative interludes as well as spirited interplay, Ferrandini and Mira combine to create a rhythmic mesh which variously supports or accentuates. The drummer reminds that he’s still one of the premier exponents of the school of pulsation founded by Paul Lovens and Tony Oxley, even if his own leadership outings indicate interests which lie in a different direction. As is his custom in this outfit, the quick-fingered Mira proceeds almost entirely pizzicato, a light and nimble presence, but one not best served by the otherwise exemplary recording during the more hectic moments. A feat of dare-devil invention, the single 56-minute piece traverses multiple moods, but remains tautly and winningly argued throughout.

The Field finds the Motion Trio with cellist Miguel Mira and drummer Gabriel Ferrandini augmented by a founding father of European free jazz, German pianist Alexander von Schlippenbach. (Previous recordings of the trio have included Dave Rempis and Peter Evans as guests.) A quality session of pure free improvisation, it starts with a brief interlude of solo piano. Amado starts playing a passage echoed by the pianist before the rhythm section rides in and soon all four are off on a full-group improv that sounds as if they have been playing together for years. Surprisingly, Mira, a powerful player in his own right, is never overtaken by the barrage and is an equal voice in the ensemble. Ferrandini sounds as if in perpetual motion and while clearly an energy player never swamps the others, always listening, commenting and complementing. The quartet also has a keen sense of dynamics as well as ebb and flow and not everything is pure ferocity. One of the most effective passages occurs about midway through: things quiet down for an exploration of bowed cymbals and cello scrapings, saxophone etching quiet lines with sparse piano chords atop. It is just one of many remarkable interludes during this continuous 56-minute set, which maintains the listener’s interest throughout. 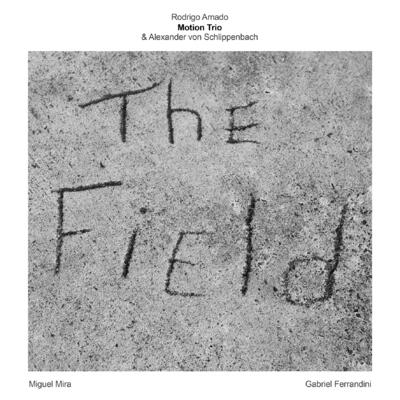