Side A
THE MOVE FOR THE QUIET

Side B
THE QUIET FOR THE MOVE
THE AIKI

From an archive of recordings made by Takeo Suetomi and which he intended for his Chap Chap label, this formidable duo between pianist Masahiko Satoh and percussionist Yoshisaburo "  Sabu  " Toyozumi is brought to us by No Business in the Chap Chap Series of name of Suetomi's label. Three recordings of superb duets with Sabu Toyozumi have already been published in this series and I recommend them: The Conscience with the unforgettable trombonist Paul Rutherford, Burning with the brilliant chicagoan trumpeter Leo Smith and Mannyokawith Kaoru Abe, the shooting star of extreme free Japanese. Masahiko Satoh is the first Japanese free jazz musician to have performed and recorded in Europe. Spontaneous with Albert Mangelsdorff, Peter Warren and Allen Blairman and Trinitywith Peter Warren and Pierre Favre were published by the Enja label in 1972. You read correctly: Mangelsdorff and Pierre Favre, two essential artists of “free” euro-jazz. Disappeared from European radars since the blessed era when labels like Enja, Moers Music, MPS Saba engaged in "avant-garde" musical subversion, it is time that we throw an ear to this formidable free pianist whose daring then were solidly supported by a talent for pianist and connoisseur of contemporary music. There is a great double album by Joelle Léandre, Signature live at the Egg Farm(Red Toucan), in duet with two Japanese pianists, Masahiko Satoh and Yuji Takahashi. It is often in unexpected albums that the profound talent of the Lady of the Double Bass is revealed and this means that these two refined pianists inspire her. With Sabu Toyozumi, Masahiko Satoh creates a dialogue on everything the drummer offers, rhythms, scansions, distant memories of an Africa that he crossed right through backpack from Cairo to Accra. Mastery of unstoppable rhythms and musical modes, contemporary language of remarkable logic and clarity, cutting of sentences on moving tempos, development of ideas over the seconds and minutes, sequences and interlockings drawn up with a cord in all spontaneity. Immanent swing… In this joint manhunt, we are swept away by the time that fades, the tension which gradually rises in a crescendo of energies and volatile strikes played with unparalleled safety…. In this flight forward which ends up spinning indefinitely, an unstable, ephemeral balance is created, but of a solidity to any test, until Sabu gratifies us with a solo where the rhythmic cells dissolve in an air of samba… And the duo picks up again until the pianist turns alone around a few notes, continuously altering a pulse, an interval, a note, a saccade in the same spirit. A beautiful story that looks like eternity, questions, subtle interactions and majestic flights. Well placed hyphenations, intense sharing and a fountain of ideas, images, fingering pass at high speed with readability and flawless assurance, without downtime. The drummer comes straight out of the school of life of the AACM (of which he was a part a long time ago) and of incessant tours affirming an un feigned Africanity. With such a distinguished pianist, the pair is explosive. A great success of March 9, 1997 in Yamaguchi City which I highly recommend.

The Lithuanian NoBusiness label’s licensing deal with the Japanese Chap Chap imprint has mined a rich seam of 1990s Japanese free music, and in The Aiki, has unearthed another glistening nugget. It presents an exciting encounter between pianist Masahiko Satoh and drummer Sabu Toyozumi, two improvisers of the first rank. Although both have been active exponents of the scene since its inception, their tandem appearances remain limited, and never before available on record. This unissued recording in crystal clear fidelity of a 1997 concert in Yamaguchi now sits alongside several other contemporaneous performances from each man made accessible through the project in recent years. Through the light and shade of two epic improvs, both principals unleash the tools of their trade: unfettered imagination; an innate sense of form; and playful animation. Part of the success surely derives from the fact that they draw on such wide hinterlands. Satoh’s untethered playing is informed by both his classical composition and swing and modern jazz exploits. His stylistically promiscuous flow periodically encompasses a bluesy right-hand embroidery, galloping classical formalism, and torrents of clipped notes which recall Cecil Taylor, all distilled into a unique personal amalgam. Only a brief pentatonic melody suggests any remotely Japanese flavor. Toyozumi calls upon his experience with like-minded spirits across the globe, and his notable sojourn in Chicago where he became the only non-American member of the AACM, to forge unusual textures into a dynamic and vibrant contrapuntal stream. Through a shifting focus on distinct elements of his kit he demarcates and orders. Even when he co-opts march cadences into a solo, it convinces as integral rather than intrusive, while in another feature he evokes the tuneful percussiveness of a Roach or Blackwell. Each feeds off the other in spontaneous syncopation. There’s an electrifying moment early on when Toyozumi suddenly accentuates a Satoh flourish on his rims. Later delicate piano prompts Toyozumi to accompany with hollow slaps on his body. Although “The Move For The Quiet” begins with unhurried quiet toms, inducing a ritual feel, it continues full of dramatic gushing rhythmically aligned unisons. “The Quiet For The Move” seems more conversational, with a stately character, at least to start, but quickly becomes wayward. Though there are tinkling and tapping downtimes in both cuts, it’s the thrill of the flailing full spate dash which proves irresistible. Happily rescued from the vaults, for those in the know this session will affirm the significance of its two sparring partners, while for those unfamiliar it argues a forceful case. 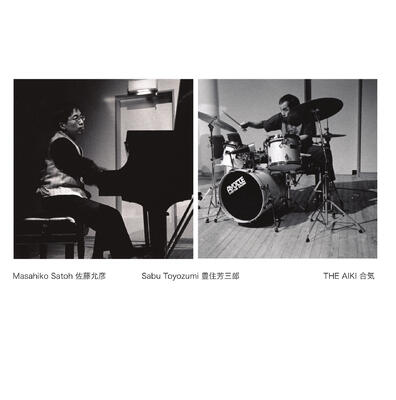