Portuguese saxophonist Rodrigo Amado manages to have an exceptionally beautiful timbre in his sax playing and his playing is both clever and versatile technically and emotionally. It is not surprising that in recent years several top albums have seen the light to which the name of Amado is linked. To name a few: This Is Our Language and A History of Nothing by the quartet Rodrigo Amado / Joe McPhee / Kent Kessler / Chris Corsano, Desire & Freedom by the Rodrigo Amado Motion Trio and The Attic by the trio Rodrigo Amado / Gonçalo Almeida / Marco Franco.
The latter trio has now adopted the name of the album, although on Summer Bummer drummer Marco Franco has been replaced by Dutch percussionist Onno Govaert. The young musician is a frequent guest in the Amsterdam and European free improscene. He is the drummer of the unsurpassed Cactus Truck, forms the trio Omawi with Wilbert de Joode and Marta Warelis and can be found in the Kaja Draksler Octet. That is a small selection from his series of collaborations. Compared to Franco, Govaert is a more robust drummer, but the subtle and soft playing also suits him, as this album certainly shows.
Of the three, Almeida is perhaps the busiest musician. With Albatre he makes solid rock jazz, with LAMA sensitive jazz with avant-garde tendencies, with The Selva experimental room jazz, with Spinifex Sufi influences pervaded jazz and with Cement Shoes both rock and free improvisation. There are a few cross streets in which the bass player moves. In The Attic, Almeida, who also plays bass guitar, limits himself to double bass.
The new album is a live recording of the performance that The Attic gave on 26 August 2018 during the Summer Bummer Festival in Antwerp. Summer Bummer is a festival for adventurous music and the free jazz of this trio certainly fits in that category. The album contains three tracks of sixteen, twelve and sixteen minutes respectively. In a total of 45 minutes, Amado, Almeida and Govaert show why The Attic should be counted among the top of European jazz.
Because - what a sound, what flexibility and what a sense of dynamics, melody and timbre has this trio. The musicians do not impose restrictions on each other, but stimulate each other in such a way that everyone has enough room for individual expression while at the same time the interaction is paramount. Amado is the only blazer in the company with the melodic role, but he does not play that exclusively. Almeida also knows how to lay melodic lines on his double bass. Govaert is not so much a connecting factor as a voice in itself.
All three musicians, however, do more than described in the previous paragraph. Govaert and Almeida do accompany Amado's solos, but in a loose and free manner. The saxophonist has a warm feeling for melody that also applies in the heavy passages. His tone has a rough edge but can also be spiritual. The first part of opener 'Walking Metamorphosis' is a good example of that. Amado finds his way melodiously, while Almeida brings out the depth of his instrument and Govaert combines odd rhythmic patterns with completely free play.
Gradually the first part gets more swinging. Govaert raises the pace, Almeida picks his strings harder and Amado combines lyricism and power. The subtlety in Govaert's play comes out well when he accompanies Almeida's bass solo on cymbals and toms. The drummer continues this subtle omnipresence as Amado uses his singing sax lines. The intensity is tempered for a while, but the expressiveness is no less. In the last part, we work towards a climax through rolling drum playing, busy picking double bass playing and impressive moving saxophone playing. The final chord is for the full Govaert drum game.
'Free For All' opens with a bass solo from Almeida, who explores the high regions of his instrument. Amado joins in and it is striking how close the sounds of the two instruments can be. Both musicians prove how you can work in an apparently calm piece of avant-garde and even be noisy without affecting that apparent calm. Govaert provides lively accents within the slow pace. Almeida hits the strings with his bow, making the double bass almost sound like an electric bass. Amado plays a repeating pattern with variations and embellishments and goes further afield in an unparalleled solo in which his ingenuity is quickly displayed. The saxophonist does not open a box of tricks but has a large arsenal of timbre, emotions and melodies. Almeida is less melodic but mostly rhythmic, while Govaert slowly but surely fills more space. At the end, a little rock terrain is explored and a groove of bass and drums is carefully created.
The last piece is called 'Aimless At The Beach' and if the first two pieces already made an impression, the trio knows how to surpass themselves in this one. It starts with emotionally charged and beautifully controlled play with false air from Amado. Govaert and Almeida disrupt slightly, delicately, and with that they create tension. After about six minutes, Almeida provides counterpoint with ironed melodic bass playing. The piece takes a turn as soon as Govaert puts his cymbals in position and thereby gives the prelude to a hectic second part, in which Amado lets his sax scream every now and then, Govaert makes the drums thunder and Almeida picks the strings hard. The musicians show their robust side and know how to excel. Amado's sax play is always melodic, although longer lines make way for shorter phrases and he uses repetitive motifs more often.
The conclusion may be clear. Amado, Almeida and Govaert form a trio consisting of three individual voices that work together impressively and enter intriguing musical paths, including side streets, while improvising. In none of the three pieces is there even a moment of weekness, and there is always something to experience with rhythmic, dynamic and melodic elements. We like this very much. Top trio. Top plate. 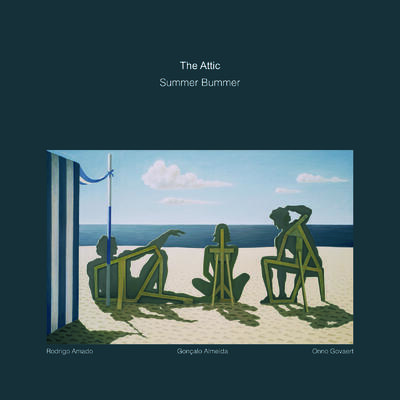