This month is the 10th anniversary of the passing of Sam Rivers (Sep. 25th, 1923 - Dec. 26th, 2011), the multi-instrumentalist (tenor and soprano saxophones, flute, piano) whose Studio RivBea in Manhattan’s NoHo district was the most famous venue in the Loft Jazz movement in the ‘70s. This concert recording from
Florence, Italy (May 17th, 1981) chronicles the “electric” band Rivers formed and toured with mostly outside the U.S. after the demise of Studio RivBea. Although influential in ‘60s avant garde jazz, especially on period Blue Note LPs, Rivers can more accurately be described as inside-outside, never a completely free player, often circling back to the forms of bebop: extended chord changes, elaborations of pop song melodies. So on this hour-plus performance, divided in CD production into nominal tracks, which are actually part of a continuous, multi-faceted continuum, Rivers veers from free blowing largely on the first two “tracks”, with his tenor, to a strong suggestion of tunes and chord changes, as on the third track: “Tenor saxophone section II”, his horn riding on funky toms (Steve Ellington), electric guitar (Jerry Byrd) and electric bass (Rael-Wesley Grant) rhythmic riffs. Ellington’s solo, mostly sticks on drumheads with some cymbal accents, follows the tenor sections, leading into three piano sections. Rivers, solo, waxes lyrical; joined by the band he is quick and pointillistic over skittering guitar. But a final piano section finds him soulful, more Ramsey Lewis than Cecil Taylor. Byrd’s solo, his tone and attack more straightahead jazz than rock or funk, leads to the final flute sections, the first over funk rhythms, flute high and bright. Rivers adds vocalizing and humming in a solo section, then returns after a solo from Grant to take it out over funky beats, interspersing his flute with some energetic scat-singing.

The fifth in NoBusiness’ series of Sam Rivers reissues, Undulation is yet another reminder of his prodigious skills as improviser across instruments, during a phase of his career in which long-form improvisation, taken to at times astounding levels of invention, was his primary modus operandi. Despite his omnipresence in the New York free jazz scene, from the mid-60s work on Blue Note into his central role in the Loft Jazz era, Rivers has never received as much attention as he might. This may be partly related to his increasing insistence, despite his distinctive voice as a composer, to pioneer long-form improvisation, which he referred to as “spontaneous creativity:” “Improvisation to make every performance different, to let your emotions and musical ideas direct the course of the music, to let the sound of the music set up its own impetus, to remember what’s has been stated so that repetition is intention, to be responsive to myriads of color, polyrhythms, rise and fall, ebb and flow, thematic variations.” As a true multi-instrumentalist – as well as the tenor and soprano saxophones, flute and piano which he deployed live, he also played trombone and viola – Rivers often signalled sectional transitions by switching between instruments, and within his playing on any of these was an immense flexibility. Steve Coleman designates Rivers’ approach part of “the snake school” – others of whom included Coleman Hawkins, Lucky Thompson, Benny Golson, and Lockjaw Davis – characterized by “directional shifts in lines and intervals,” and a “slippery,” “long and rangy” approach to phrasing connected to Rivers’ physical movements while playing the music, which Coleman likened to a “snake dance.” Likewise, latter-day collaborator Anthony Cole asserts: “It moves!  It’s danceable if you want to dance. It’s listenable if you want to listen. If you want to close your eyes and slip off into a cosmos somewhere, it lets you do that.”

In 1975, as well as recording Sizzle with former Lifetime guitarist Ted Dunbar – for my money, his most underrated great record – Rivers had played with James Blood Ulmer in the lofts. But it wasn’t until the 1980s, following the ending of his group with Dave Holland and Thurman Barker, that he regularly included guitar in his groups. The band on Undulation – Rivers, guitarist Jerry Byrd, bassist Rael Wesley Grant, and drummer Steve Ellington – was previously documented on Crosscurrent (1982), and a later group with Lucky Thompson’s son, Darryl Thompson, replacing Byrd, and Steve McCraven replacing Ellington yielded Lazuli (1990). Guitar added something else to these groups, drawing more closely from dance musics. As Rivers remarked: “I’m trying to play exciting, advanced music with a nice, primitive beat – combine the intellect with the soul.” Sizzle came out the same year as Ornette Coleman’s Dancing in Your Head, the debut of his Prime Time band. Both are sextet records, Rivers’ with one guitarist and two drummers, Coleman’s with two guitarists, plus an electric bass to fatten out the ensemble sound. Coleman later claimed that the main reason for using electric instruments was to match the orchestral amplitude of Skies of America, and both Sizzle and Dancing can be seen as attempts to expand the volume and timbral possibilities of the conventional jazz small ensemble. While Coleman treats funk influences in terms of interlocking melodic fragments, Rivers emphasizes long, improvised streams, with rock and funk just two of many idioms from which the group might draw at any point: from double time to no time, backbeat to polyrhythm, in fluent and fluid disregard for genre.

Like Bern Nix in Prime Time, the hollow-bodied timbre of Dunbar’s guitar on Sizzle and Jerry Byrd’s guitar here comes from (free)bop rather than funk or rock, providing a suitably knotty interaction with Rivers’ fluid, changing lines. (Byrd had come up alongside George Benson in Pittsburgh during the early ‘60s). Drummer Steve Ellington, an early collaborator from Rivers’ Boston days, combines clattery responsiveness with occasional multi-dimensional backbeats (most notably on the third track); the round, elastic sound of Grant’s electric bass further nods to the funk dimension, though his actual lines are closer to turbo-charged jazz inflections, not so much walking bass as a constant sprint. As ever in Rivers’ music, each player gets an extensive solo feature: not only is this a fundamentally collaborative group music, but we get to hear every detail of its component parts. This is a music so packed that a blow-by-blow description would come across as little more than a pedantic reduction. Suffice to say that, as the disc opens, Rivers comes out in blazingly talkative mode, his rapid melodic extrapolations bejewelled with trills, honks, multiphonic wails, and juddering staccato blasts closely shadowed by Byrd’s crisp-toned guitar. For sheer exhilaration, there’s little to beat these kinds of driving “snake dances,” and the other musicians, intensively responsive, push the scampering, rough-and-tumble feel to new heights. Other highlights are the unaccompanied tenor feature – at once frantically searching yet assured and fixed in direction – the bluesy scramble of Byrd’s solo – and of the final piece, Rivers greeting Grant’s infectious bassline with an appreciate holler before launching into lithe flute lines and unexpected scat singing that crackles with serene energy, all while offering a closing rollcall of the members of the band. That records like Sizzle are still out of print suggests the pitfalls of major label releases – underpromoted and buried, then hard to re-release – in contrast to the fertile live archive mined by NoBusiness. We can, however, be glad that the Lithuanian label continues to do such sterling work: Undulation is ample evidence of Rivers’ power, present on virtually anything he touched, and an important documentation of a little-known chapter of his work. 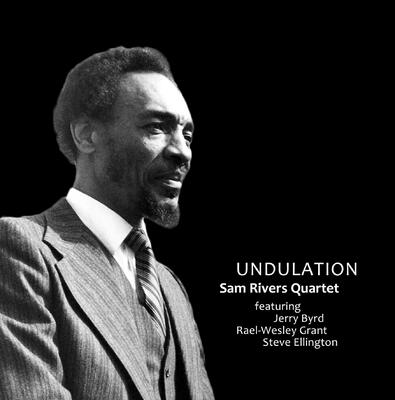