Recorded in 2020 at MAMAstudios, Vilnius, Lithuania

Onutė Narbutaitė is one of Lithuania’s best-known composers. She learned the basics of composition from Bronius Kutavičius, graduating in 1979 from the Lithuanian State Conservatory (now the Lithuanian Academy of Music and Theatre) where she studied composition under Prof. Julius Juzeliūnas. From 1979 to 1982, she taught music theory and history at the Klaipėda Faculty of the Lithuanian State Conservatory. Since then, she has concentrated solely on her creative work and lives in Vilnius. In 1997, Narbutaitė was awarded the Lithuanian National Prize for Culture and Arts, the highest artistic distinction in Lithuania, for her oratorio Centones meae urbi. Quite a few of her compositions were awarded at the annual Best Works of the Year awards of the Lithuanian Composers’ Union, as well as included in the top-ten lists of recommended works at the International Rostrum of Composers (organized by UNESCO’s International Music Council and radio broadcasters on all five continents). At the 2004 Rostrum session in Paris, Narbutaitė’s Melody (the 2nd movement of her Symphony No. 2, otherwise known as orchestral version of the Melody in the Garden of Olives included in this album) was chosen as number one in this list. Narbutaitė is also the recipient of the Lithuanian Association of Artists prize; the St. Christopher statue awarded by the Vilnius City Municipality, the highest honor it can bestow, for depicting Vilnius in her music; the Gold Star awarded by the Lithuanian Copyright Protection Association; and the Golden Cross of the Stage (as the best theatre composer of the season, for the opera Cornet), among many other prizes. Narbutaitė’s compositions are included in more than 30 CD releases, among them 8 CDs entirely of her music (on such labels as Finlandia Records and Naxos). 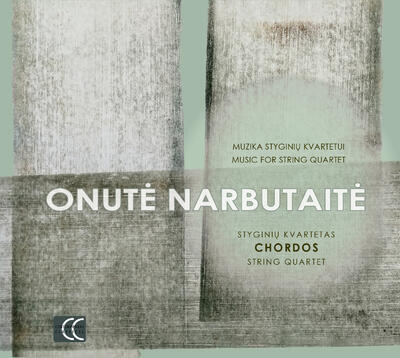