Reed player Oluyemi Thomas has said that music has an element of prayer in it. That’s certainly true of the music on this album with bassist Sirone and drummer Wimberly; its supplication, compassion, and sanctified joy is prayerful indeed. It’s also artfully contrived free jazz improvisation that makes brilliant use of contrasts in color and texture, instrumentation, and structure.

Oluyemi’s instrumental evocations and abstractions of the human voice, which he plays on bass clarinet, flute, soprano sax, and musette, have a soft-edged lilt that conveys both strength and an essential lovingness. His unique bass clarinet conception, totally unlike Eric Dolphy’s, is especially infused with the sound of the human voice. He uses a personal intervallic vocabulary that gives a characteristic profile to his lines and phrases, which echo speech cadences as he works his way from short phrases into longer and longer ribbons of textured color.

The trio, which the San Francisco-based Thomas assembled for the 2008 concert at New York City’s Brecht Forum captured on this CD, are sure hands at free jazz improvisation. Each improvisation develops organically at its own pace, and without any fixed plan. The first three tracks form a suite nearly 17 minutes long. In contrast, “Dream Worlds” is just a tidy three minutes long, but they pack a lot into it, from a bass and drums duo to a drums and soprano sax dialog to a concluding trio. “Heavenly Wisdom” evolves in an additive manner, beginning with Thomas’s opening bass clarinet solo which Sirone and Wimberly successively join.

Besides their careful attention to instrumentation and forms, the contrasts in color, texture, and sound among the trio members further contributes to the music’s variety. Each of Sirone’s notes are decisive, they hit hard, almost with a suppressed fury. His low notes thunder and throb, but there’s a willow-switch litheness and lightness of color to his higher notes. On “Spirit of Ifa” and the title track, the sharp report of his plucked notes cut through the ensemble. The hyper-Paul Chambers rasp and soaring arch of his bowing on “Mystic Way” creates waves of sound that envelops and complements the surging and increasingly ecstatic bass clarinet of Thomas. Wimberly plays drums with attention to dynamics, melodic contours, density, and colors, all of which work to put him on an equal footing with his band mates even as he contributes the rhythms that keep the music pulsing.

More than elegant formal musical elements make this a disc worth listening to, however. Thomas, Sirone, and Wimberly play with a fervor imparted by a belief that what they’re creating is more majestic, vaster, than the individual. There’s a genuine feeling of praise and celebration, a hope borne of faith in a spiritual realm, and an energy and urgency that’s needed to break the bonds and illusions of this world and reach a higher truth. Beautiful stuff.

When the sum of three instrumentalists gifted with fervent souls gives as a result a special brand of free jazz, vibrant discharges interspersed with heartfelt reflections. Through his reeds, Thomas depicts the pulsating core of intense stories, a sudden restlessness, an enraptured faith. The late Sirone – here supposedly on his last recording – is a puncher with refined technique, a Marvin Hagler of the double bass. Wimberly knows how to listen in silence – as any intelligent drummer should – and speaks openly only when he thinks it’s appropriate. A splendid record. 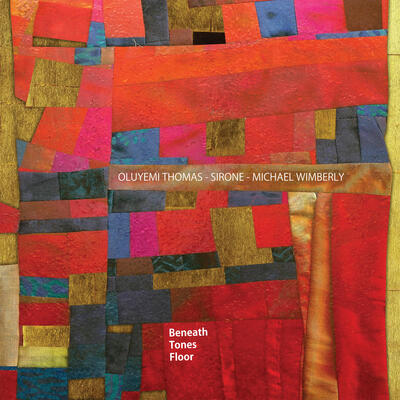