Side A
MULTA DIES

Side B
MULTA NOX
MULTA LUX

This is a quartet bristling with ideas, comprising Nate Wooley (trumpet), Liudas Mockūnas (contrabass clarinet, soprano and tenor saxophones), Barry Guy (double bass), and Arkadijus Gotesmanas (drums and percussion). Both Wooley and Guy were artists in residence for the 2019 Improdimensions and as far as I can tell this is their first recording together. There are three improvisations: “DIES” (day), “NOX” (night), and “LUX” (light). In the same way that with Irvin’s art the action of his wrist is ever present, so here there’s a sense of physical engagement being the progenitor of sound and shape through the nuances of pressure, speed, and articulation; and like Irvin, imbued with a certain opulence – welters of plucked notes, brass sunbursts, the fluid consistency of wriggling reeds, and bright, crystallised percussion. And in both cases the process of their making is analogous to going on a journey. “MULTA DIES” presents mobile and static pockets of activity, each distinct but drawn into the ambit of the other, an intricate tracery carved out by bass and drums against sustained notes on tenor and trumpet. In time the soprano saxophone opens up a different region, agitated, erratic, cracking with febrile excitement as the ensemble revels in the sheer palpability of sound. In contrast, “MULTA NOX” works on a different scale, a nocturnal study marked by the darker tones of the contrabass clarinet and an evanescent construction, summoned out of air. Glittering flecks of percussion, Guy’s light harmonics and muted trumpet float above subterranean murmurings. As the range expands the music gains in solidity with grisly smudges on clarinet and scraped bass strings, then thins to close as Wooley enunciates soft phrases over a sonorous repeated figure from Mockūnas. “MULTA LUX” takes a more animated approach, a fragmentary texture made up of daubs and dashes proceeding like a series of lines – crossed, broken, and reconnected – never fully resolved. My only complaint is that the album is just under 37 minutes in duration, though admittedly that’s about average for an LP. This is a quartet full of potential and I was left wanting more, much more. In these melancholic times there’s no telling if and when that might be, but in the meantime in addition to the albums reviewed above you might want to try Mockūnas and Guy’s Lava (NoBusiness, 2012), also recommended.

The last, but not least in the list of quartet albums is the phenomenal NOX project with Liudas Mockunas, Nate Wooley and Arkadijus Gotesmanas, recorded during Improdimensija (Improdimension) concert series dedicated to improvised music, located at MAMAstudios, Vilnius, Lithuania. Quoting Colin Green of Free Jazz Blog: "Both Wooley and Guy were artists in residence for the 2019 Improdimensions and as far as I can tell this is their rst recording together." The music is peaceful and re exive, yet full of enormous power. The instrumental set reminds of Ornette Coleman and Old and New Dreams quartets, but, of course, the music is purely free improvised and abstract. But, there is a certain consonance between the trumpet and reed, and a certain melodic engagement of the bass-drums section. They play three tracks. On Side A there is a "Multa Dies", a 16 minutes masterpiece of synergy and mutual stimulation. It is a permanent collective conversation of four masters, full lyricism and meditative re ection. Side B contains two tracks: a minimalist, quiet "Multa Nox", lasting 14 minutes, and a shorter, 6 minutes long "Multa Lux", the most expressive track with fantastic saxophone-trumpet interactions. And Barry and Arkadijus making it all even more expressive. For me this is an outstanding achievement!"

Liudas Mockūnas is a Lithuanian reed player, composer and improviser who, over the past 20 years, has built up an impressive discography, with international collaborations including duets with Marc Ducret, Barry Guy and William Hooker and groups with Vladimir Tarasov, Vyacheslav Ganelin and Raymond Strid. These two LPs, recorded at Improdimensija (Improdimension), a Vilnius concert series, extend that documentation. Mockūnas, who turns 45 this month, may not be well known outside his native land, but he sounds perfectly at home with some of the world’s most accomplished improvisers. NOX presents Mockūnas in a classic quartet formation, collectively improvising with trumpeter Nate Wooley, English bassist Guy and the veteran Lithuanian drummer Arkadijus Gotesmanas. The sidelong “Multa Dies” assembles itself gradually, with Mockūnas on an emotionally taut sopranino exchanging brief phrases with Wooley as Guy throws off decorative runs. The first phase that hints at the group’s power is a dialogue between Wooley and Mockūnas consisting of alternating high-pitched cries that build both emotional and physical resonance, leading to an intense soprano solo with strongly interlaced support from Guy and Gotesmanas, a subtle drummer whose contributions move quickly from subtle inflection to explosive force. Mockūnas works in his other horns, tenor and contrabass clarinet, in the evolving sonic textures of the piece. “Multa Nox” is as subtle as collective improvisation can be, at times a delicate reverie that seems to be heard through quicksilver bass, at once slow and resonant with sudden delicate flights into the upper register, as Wooley moves from muted to open trumpet and Mockūnas explores high harmonics on his contrabass clarinet, creating a kind of bass whistling. As the music gradually grows in intensity, Gotesmanas adds rapid snare punctuations before it turns to a slow, pitchbending passage of trumpet with some bass mirroring, finally concluding in a kind of dour lullaby of trumpet, contrabass clarinet rumbles and bowed bass harmonics. The concluding “Multa Lux” is hyper free jazz, with constantly shifting voices cascading over one another, including Wooley’s damp-air whistles and Mockūnas’ bizarre bass register on tenor. It’s another masterful study in collectivized movement, with constantly changing individual inputs from the musicians somehow forming a continuous tapestry of sounds. 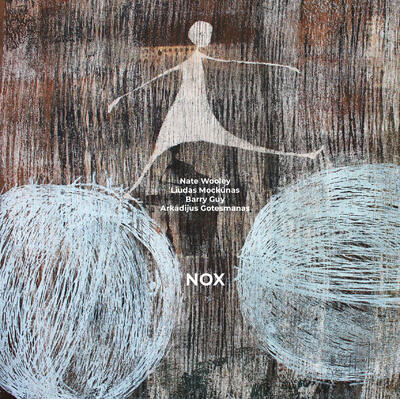