Maciej Lewenstein -
NoBusiness continues the fantrastic Chap Chap Series, and releases another classic of Japanese, or better to say East Asian free jazz. This time it is an atmospheric recording of the concert by the super trio of Mototeru Takagi, Kim Dae Hwan, & Choi Sun Bae, recorded in Café Amores in Hofu City in Japan in Summer 1995.
They start with a duo "SeishinSeido" by Mototeru Takagi and Choi Sun Bae, with absolutely phenomenbal dialogues, consonance and dissonances of the tenor saxophone and trumpet. This is followed by Mototeru's solo "Remember". Side B of the LP starts another solo by Choi Sun Bae this time. The set ends with the absolute highlight: a powerful trio track "Step by Step". Great document of the fame and glory of free jazz in Japan!
Stuart Broomer - New York City Jazz Record

Seishin-Seido documents a meeting between two branches of Asian free jazz, the Korean and the Japanese, captured during a 1995 visit to Japan by late drummer Kim Dae Wan (62 at the time) and trumpeter Choi Sun Bae (then 55). They are heard here with tenor saxophonist Mototeru Takagi (who died in December 2002 at ~60) in a performance from Café Amores in Hofu City (where a number of Chap-Chap albums were recorded). Each has a strongly developed instrumental voice and the performance gives free rein to a duet and solo pieces.

The opening title track is a dovetailing duet by Choi and Takagi, whose stylistic compatibility is immediately evident, though their personalities tend to invert the usual free jazz balance of tenor saxophone and trumpet. Takagi has a strong Albert Ayler influence in his wandering, vocalic lines, but with a

slightly muffled, personal sound; he may be the gentlest of post-Ayler tenor saxophonists. Choi, for his part, is as aggressive as a free jazz trumpeter can get, with whistling, bending runs descending from the upper register, a genuine wake-up call.

There then follows a series of three solo pieces that take up approximately half of the 67-minute running time. The first and longest is Kim’s 14-minute “Natural Sound”, a masterpiece of rhythm, timbre and mood, which makes the most of his unusual kit: played standing, on the evidence of booklet photographs, and employing what appears to be a horizontal bass drum, another resembling a shallow timpani and a large cymbal played with sticks and mallets in each hand. At other points in the performance, he shows his flexibility by employing woodblocks as a principal instrument. The solos by Takagi and Choi are similarly rich: each has a keen formal sense near his expressive core.

The full trio eventually arrives with “Ethyopia” and it is a genuinely interesting ensemble, the absence of bass or keyboard giving it a kind of expressionist minimalism matched to an air of necessity, something that emphasizes further the Ayler connection and also a corresponding sense of traditional New Orleans bands. The concluding “Step by Step” develops with short echoing horn phrases over turbulent, complex percussion, with saxophone approaching trumpet’s intensity. There is, however, a sustained and shifting upper-register wail in which trumpet fully enters the complex, flexible range of a reed instrument.

The performance appears to have been sufficiently inspiring for Takagi later to play with Choi and others in Korea. 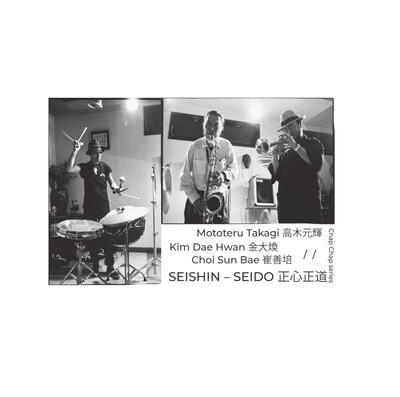