Side A
TRIO III
DUO II

Side B
TRIO II

This live date from the titular Nagoya venue reveals the mellow side of Japanese free jazz. That could seem unlikely when considering the lead name, guitarist Masayuki Takayanagi, a maverick follower of Lennie Tristano who later turned to total freak-outs and noise, partnering with the likes of outsider saxophonist Kaoru Abe. Recorded nine months before his death 30 years ago this month, the concert finds him in the company of regular collaborator bassist Nobuyoshi Ino, plus celebrated pianist Masabumi Kikuchi, who died in 2015, sitting in during a trip home from his long sojourn in the U.S. Kikuchi, who worked with Miles Davis, Gil Evans, Dave Liebman and Joe Henderson, as well as a cooperative trio with Gary Peacock and Paul Motian, exerts a pull towards the tradition. But Takayanagi and Ino are not unwilling accomplices. Even on one of the two cuts they play as a duo, they touch on a standard material as a basis for further exploration. Much of the time Ino, who sure-footedly straddles the inside/ outside dichotomy, anchors the often conversational interaction close to the mainstream. But it’s when he picks up his bow to become an equal voice without any supportive function that proceedings unloose their moorings. One of the high points of the disc comes on “Duo I” when his arco slashes and organ-like tones engage in prickly dialogue with Takayanagi’s scratchy fragmentation. Similarly on “Trio III” Ino extracts creaks and groans from his bass as the weather veers stormy, Kikuchi thunders and the guitarist flashes in dramatic gesture. Conventional gambits reappear during “Trio I” as the three parlay an abstraction, which doesn’t shy from consonance. Later Kikuchi plies repeated rhythmic figures that rejuvenate the exchanges, before ultimately harping on an insistent progression. Once Ino latches on, the pianist moves into a loose rendition of Monk’s “Locomotive”, with Takayanagi adding oblique but blues-inflected commentary. It forms the final chapter in an album, which soothes as much as it stirs.

Flash forward 15 years and more instances of first generation Japanese free music are on Live at Jazz Inn Lovely 1990 (NoBusiness NBCD 135 nobusinessrecords.com). In one way it was a reunion between two pioneering improvisers, guitarist Masayuki Jojo Takayanagi (1932-1991), who began mixing noise emphasis and free improvisation in the mid-1960s with in-your-face groups featuring the likes of saxophonist Kaoru Abe and pianist Masabumi Puu Kikuchi (1939-2015). Kikuchi evolved a quieter style after moving to the US in the late 1980s and this was the first time the guitarist and pianist played together since 1972. Problem was that this was a Takayanagi duo gig with longtime bassist Nobuyoshi Ino until Kikuchi decided to sit in, creating some understandable friction. Agitation simmers beneath the surface adding increased tautness to the already astringent sounds. This is especially obvious on the trio selections when the guitarist’s metallic single lines become even chillier and rawer. Initially more reserved, Kikuchi’s playing soon accelerates to percussive comping, then key clangs and clips, especially on the concluding Trio II. For his part, Ino serves as a bemused second to these sound duelists, joining an authoritative walking bass line and subtly advancing swing to that final selection. On the duo tracks, he and the guitarist display extrasensory connectivity. He preserves chromatic motion with buzzing stops or the occasional cello-register arco sweep. Meanwhile with a minimum of notes, Takayanagi expresses singular broken chord motion or with slurred fingers interjects brief quotes from forgotten pop tunes. On Duo II as well, Ino’s string rubs move the theme in one direction while Takayanagi challenges it with a counterclockwise pattern. Still, fascination rests in the piano-guitar challenges with Kikuchi’s keyboard motion arpeggio-rich or sometime almost funky, while Takayanagi’s converse strategies take in fluid twangs, cadenced strumming and angled flanges. 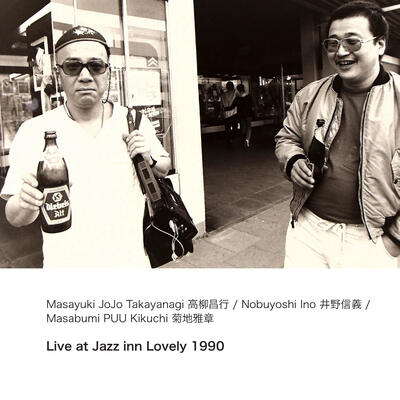