Live at the Blue Whale

This is the third in a series of live recordings by the Bobby Bradford/Hafez Modirzadeh Quartet, each in a different West Coast venue, each with a different rhythm section. Here the group is completed by bassist Roberto Miguel Miranda and drummer Vijay Anderson. Cornet player Bradford , who turns 85 this month, was an early collaborator of Ornette Coleman and long co-led a group with clarinetist John Carter. He’s hard to match among free jazz cornet players (and trumpeters) for the sheer musicality, deep roots and grace of his approach. Reedplayer Modirzadeh studied extensively with Coleman, integrating Harmolodics with his own masterful command of Persian tonal and rhythmic systems. Here they pursue their sometimes joyous, frequently reflective music, with Modirzadeh focusing primarily on soprano saxophone. The LP opens with Miranda’s “Raphael”. The theme is announced by his gorgeous, cello-like arco bass. The piece marks a mode’s passage from the Middle East to Spain, the former most explicit in Modirzadeh’s use of karna, an Iranian horn, and khaen, a bamboo mouth organ, the latter in Bradford’s muted cornet. “Free the Idea—Variations on an Ornette Coleman Theme”, by Modirzadeh, is a fine reimagining of Coleman’s early Atlantic quartet, with Miranda and Anderson providing loose, springy propulsion and the winds soloing with aplomb. Modirzadeh’s brief and engaging “One Bar Lowe” has him revealing a Steve Lacy-like piquancy of tone in a kind of North African market bop. Opening Side B, Anderson’s “Almost Not Crazy” gradually becomes the most expressionist piece, Modirzadeh pressing his soprano upward to rapid, swirling cries beyond the group’s customary freebop contours; Anderson turns in a driving solo that sounds like a drum corps set free. Bradford’s closing “Crooked Blues” is an oblique dive into tradition, with the horns developing contrasting notions of blues, Modirzadeh’s soprano, Coltrane-smooth, and Bradford’s cornet raw, frayed and expressive, adding to a program that articulates what the continuing essence of jazz might be. 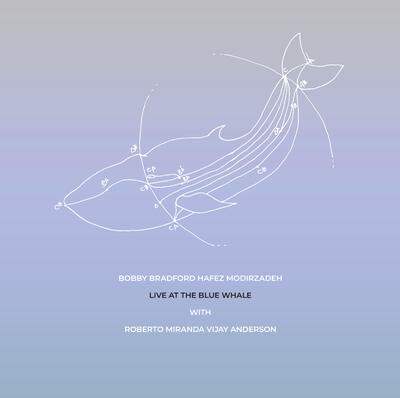