The Lithuanian NoBusiness label pulls another gem from the vaults with the release of this previously unissued live recording of Derek Bailey and Japanese reed player Mototeru Takagi, recorded live in 1987 at FarOut, Atsugi, Kanagawa, Japan. Part of the initial group of Japanese free jazz players, Takagi ought to be far better known than he is. Starting out in percussionist Motoharu Yoshizawa’s trio in 1968, Takagi went on to play with key Japanese free improvisers like Masahiko Togashi, Masayuki Takayangi, Motoharu Yoshizawa, Itaru Oki, Toshinori Kondo and Sabu Toyozumi. From the late ‘60s on, this community of musicians began charting a collective approach to uncompromising freedom, increasingly collaborating with visiting free players from Europe and the US. Takagi was amongst those tapped when Milford Graves visited Japan in 1977 (documented on the album Meditation Among Us) and when Derek Bailey visited in 1978 (documented on the album Duo & Trio Improvisations). Bailey returned to Japan a number of times after that 1978 meeting, including the tour that resulted in this recording.

When Bailey returned in 1987, he played some solos, duos with dancer Min Tanaka, and in a trio with Peter Brötzmann and percussionist Sabu Toyozumi as well as in this duo session with Takagi. The reed player sticks to soprano saxophone across the four expansive duos, a half hour opener, two 17-minute pieces, and a relatively compact 8-minute foray. Bailey’s electric guitar playing is in top form throughout, his lightning, refracted angular phrasing bursting with brittle resonance. One can readily hear why Bailey gravitated to Takagi. The reed player immediately hits with an acidic attack, starting with long tones that ring against Bailey’s harmonics, patiently building to lithe, spiky intensity. It’s always great to hear Bailey when he finds a potent foil, and the two clearly revel in the intertwined, parallel arcs that develop. Particularly over the course of the first piece, they take their time, probing, prodding, letting their respective lines course, ring against each other, unhurriedly unwind, only to lunge forth, bristling with skirling vigor, ending with Takagi looping a lyrical thread to close things out.

“Duo II” starts with a deliberate, spare solo by Bailey as his overtones and prickly lines splinter and scrabble with resolute deliberation. Takagi only enters two thirds of the way through, picking and prodding against Bailey’s lines, and then quickly gathering momentum as the two accelerate their way toward a skittering conclusion. The 8-minute long “Duo III” introduces a freely abstract lyricism to their playing, as the two navigate their way with restless flutters and flourishes, ending with a short solo segment for the reed player’s circuitous phrases. “Duo IV” picks up with pinched, overblown reed overtones that resolve into melodic threads which stretch over Bailey’s steely resonance and fissured harmonic fragments. Bailey’s mastery of attack and sustain shines through, often laid bare as Takagi drops back, waiting for opportune moments to dive back in. There are sections which build more density, owing perhaps to the rapport the two have developed over the set. But they never let that density overwhelm the proceedings, knowing when to pull back to build tension and then release in flurried torrents. This release is a welcome discovery of a prime, unknown session by Bailey and should serve to put Takagi on listeners’ radar.

Album bringing together guitarist Derek Bailey and saxophonist Mototeru Takagi , here on soprano sax and available on CD and LP. In 1987, Derek Bailey was at the top of his game. During various stays in Japan, he regularly meets a series of Japanese musicians who had participated in his LP " Duo & Trio Improvisation(Kitty Records April 1978): trumpeter Toshinori Kondo, percussionist Tsuchi Tsuchitori, double bassist Motoharu Yoshizawa, and saxophonists Kaoru Abe and Mototeru Takagi. He also met drummer Sabu Toyozumi, a close companion of this now decimated sibling of improvisers, the extraordinary trumpeter Toshinori Kondo having passed away last month. Among all these pioneers of Japanese free-music, Mototeru Takagi has not acquired the legendary status of Abe, Takyanagi, Toyozumi, Kondo, Sakata whose recordings flourish to the point that No Business publishes an uninterrupted series of albums in collaboration with the Chap-Chap labelby Takeo Suetomi, himself a legendary concert organizer. He saw fit to offer this distant memory of a concert in Atsugi, where Brötzmann and Bennink engraved their most sought-after album by collectors, by hitting hard! No matter who he plays with, Derek Bailey cultivates an extraordinary art to take creative advantage of a confrontation - dialogue by revealing even more the (unlimited) richness of his playing. If Mototeru Takagi is undoubtedly not a comparable soprano saxophonist to giants like Steve Lacy, Evan Parker or Lol Coxhill, he follows his path without blinking, extending his language boldly showing a strong will. His approach is oriented towards a form of detached lyricism, poetic, subtle by its alterations on the tones and extreme sound points. Duo I spans 28:11. The sauce gets even better in the second improvisation (Duo II 17:39) where Derek Bailey plays solo acoustically to begin with, sometimes evoking the sound of a Japanese koto zither. Obviously, this inspires Takagi who applies himself to dialogue with a beautiful logic. Duet III 8:09: the dialogue reaches fullness, the timbre of the sax acquires an intense glow, a serene warmth. He continues on his way and discovers a winding path while his companion is silent, facing a questioning silence streaked by trebles. We continue on the Duo IV. Derek Bailey has resumed his electric guitar and exploits the harmonics with the volume pedal. Takagi's playing evokes Lacy's polytonal ritornellas and cascades. The duo then beats at full speed with the dry staccatos to the stringing harmonics of the guitarist without the saxophonist escaping from his pensive, even reserved attitude. The guitar comes alive, the guitarist's swings in the distended intervals progressively evolve in impenetrable cadences and like a duck in front of a sunny pond, the sopranist cackles and noses to finally stretch saturated highs in response to the cleavers of manic clusters. While the concert therefore reaches a climax where everyone leaves their usual procedures in complete metamorphosis by stretching the sounds, we have the feeling that DB would certainly have selected this last part in an imaginary Company Made in Japan album. 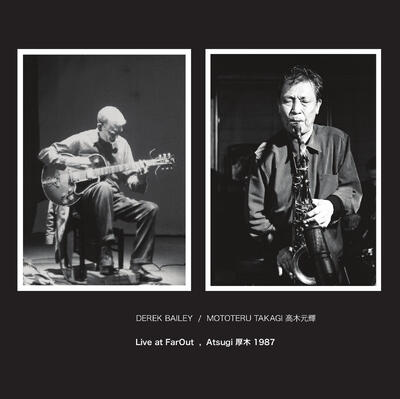