For You I Don't Want To Go

The piece begins meditatively, a few bass notes introducing barely-voiced cornet, air mixing with sound in a kind of mutation of brass, one tone blurring into another in a way suggesting the plaintive interiority of a shakuhachi. The tempo picks up and Knuffke mounts a sparkling, register-spanning lead against Bisio’s rapid propulsion, almost as if roused from lament. Even here, though, Knuffke will fasten briefly on a couple of high notes, returning to that keening mutated sound, mining emotional nuance. Throughout, the musicians move in and out of themes, deftly shifting tempos and mood and creating surprising variety, whether it is Knuffke’s shift to sharply-pinched sounds and muffled half-valves or Bisio’s horn-like articulation when playing arco.

If one may imagine such a piece, with both working within relatively conventional techniques as sparse (Knuffke’s timbral shifts are subtle and complex but largely monodic), it is not. Its essential characteristics are clarity and directness, virtuoso interaction without ever becoming mere display. 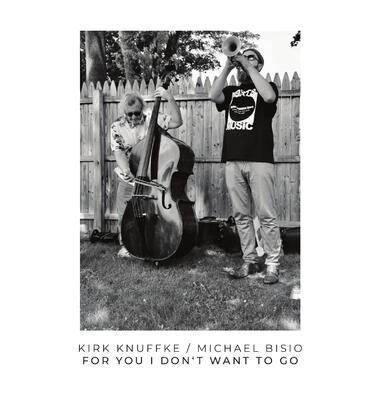