THE OTHER MORNING IN THE PARK
BROADWAY BIRDY. PART I

From the prosaic title on, a casual vibe pervades Some More Jazz which belies the depth of artistry involved in its execution. On each of the three cuts on this 47-minute LP, the seemingly random start progressively comes into focus. Notice of the naturally evolving unfolding arrive thick and fast. On “The Other Morning In The Park” the pulse gradually coalesces from drummer Willi Kellers’ clanking steel pans, bassist Jan Roder’s discursive pizzicato and saxophonist Thomas Borgmann’s sweet soprano musings. And then Roder drops out, leaving Kellers and Borgmann in tandem, so that when they pause he can return to initiate a new direction. Such shifts occur with so little fanfare they can be barely discernible.

Kellers similarly plays a key role. Like Louis Moholo-Moholo, he prompts, cajoles and almost sneaks in the beat, all the while without imposing himself, the architect of a transparent sound in which everyone can be clearly heard at all times. He supplements that dexterity with another talent: the easy way in which he moves between haphazard clatter and relaxed propulsion.

On “Broadway Birdy” (split across the two sides), Kellers’ thumb piano, Roder’s strum and Borgmann’s toy melodica create a bucolic scene, briefly alluding to the hymn “Abide With Me,” before the reedman wields his tenor saxophone, outlining a wavering dirge which at times combines echoes of Trane’s “Alabama” and the free flow of legendary Chicago saxophonist Fred Anderson. But even at his most hectic, Borgmann never loses control, building coherently and soulfully, sounding both familiar yet newly minted.

As with those previous albums, although each of the three tracks is credited to a different band member, the uncomplicated melodies could as well be extemporized. But the apparent simplicity is no obstacle to fulfilling and expressive invention. At the outset of “Chatham Bellbird” Borgmann uses tonal distortion to vary an incantatory tenor phrase, ultimately peaking in falsetto cries and hoarse shrieks, before later winding down on soprano with a slightly melancholy poppy lyricism. Certainly the spontaneity with which each piece develops suggests three finely attuned sensibilities at work, or perhaps that should be at play. But work or play, it’s an outstanding release.

Bluster is at a premium during the extended improvisations that make up Some More Jazz. While the trio connection is as tight as the other band’s, dips into elevated reed bites, screechy sul tasto bass lines, Borgmann’s switching among tenor and soprano saxophones and toy-melodica and Kellers scattering shots among drums, steel drum and percussion are more upfront The miscellaneous percussion is most audible on the first track, with tam-tam-like shakes and vibraharp-like clips. Yet no fissure is created as echoing saxophone trills and bites, staccato double bass string stabs and a hand drumming beat are heard. The concluding “Catham Bellbird” showcases Borgmann’s dip into glossolalia and staccato bites via pinched soprano saxophone trills. But the two part “Broadway Birdy” best defines the trio’s talents. Not only are the parts knit together by a stentorian bass solo linked and drum clip-clops, but Borgmann’s transformative saxophone technique are also in full display, Nestled among the shading, slurps and shatters that suggest John Coltrane’s modal work are playful cadences that could come fr0m the Stan Getz songbook. In terms of melody there are also sequences throughout when the saxophonist’s asides suggest he’s hearing a half-forgotten songbook air, which works as an earworm, but is never really defined. Truth in packaging Some More Jazz offers instances of just that, with the sounds propelled by three accomplished players. 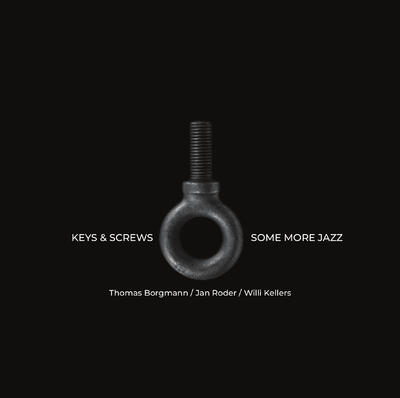