Side A
A FISTFUL OF JONES
TWELVE ANGRY JONES

Side B
THE JONES WHO KNEW TOO MUCH
THREE JONES OUTSIDE EBBING, MISSOURI

Jones Jones is a free improvising trio consisting of Bayarea saxophonist Larry Ochs and bassist Mark Dresser along with the Lithuanian-resident drummer Vladimir Tarasov, who turns 72 this month. That “Jones”, doubled in the group name, may have the standard usage of “craving”, but it’s a rampaging impulse to free expression and sonic exploration, an impulse to open dialogue that creates and discards textures and moods with radical abandon, regularly driving toward new life and new sounds. That compulsion drives every episode and is enshrined in every track title, here inserted, jonesingly, into the titles of famous films, whether classic or recent, hence “The Jones who Knew Too Much” and “Three Jones Outside Ebbing, Missouri”. A Jones in Time Save Nine is released on LP with three additional tracks available as a download. The greatest challenge in discussing free improvisation is adequately describing degrees of collaborative empathy or engaged difference, but a high degree of either (or both) is the mark of any really good improvising ensemble and present here. The instrumentation of saxophone, bass and drums insists, to some degree, on the jazz tradition and paths lead to rhythmically propelled dialogue. Ochs is a wildly vocalic player: notes bend, overtones rush in, sounds contort (at times suggesting the breathing apparatus of Archie Shepp’s Ben Webster wedded to the bullying warmth of Evan Parker’s Coleman Hawkins, for anyone seeking easy parallels). Dresser adroitly handles multiple pluckings and bowings while Tarasov is always listening, feeding and finding new directions, a master of conversational dynamics and nuance. Directions change rapidly and impulsively: “A Fistful of Jones” begins with roars and squawks and rattles, a call to order that later find sustained momentum. “Twelve Angry Jones” starts with shrill, high-speed sopranino, only to embrace, minutes later, a kind of warm balladry with Dresser finding his bass’ inner trombone. One feels the spontaneity and empathy everywhere here, whether Tarasov revealing at one point that a bass drum is all he needs or Dresser dredging electric cicadas from his acoustic bass. There are all kinds of improvising ensembles around, but Jones Jones actually insists on improvising. 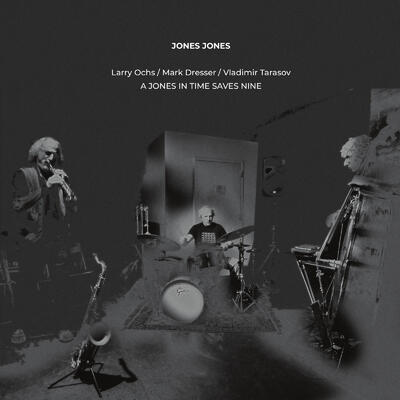