The second side of this beautiful duo album was recorded more or less half a year after "The Swiftest Traveller" in Vilnius, while the rst one in December 2019. The recordings took place live during the concert series dedicated to improvised music, "Improdimensija", at MAMAstudio. The music is a little less exploratory than this recorded with Don Malfon or Torben Snekkestad. It sounds for me more like a 21st century response to the late music of Jimmy Giuffre music from the end of 1980s and 1990. On the Side A there are "Improdimensions I - Part I-III". Agustí hardly gets inside piano, and maybe that is the music sounds more traditionally". Both "Part I", and the wonderful "Part II" are for soprano, and remind me of other impressionistic piano-soprano duos, like Herbie Hancock and Wayne Shorter and their "! + 1". My favorite is "Part III" played on tenor, reminding me of "old" duos of Agustí with Evan Parker. Side B contains also three parts. The opening "Part I" is a quiet lyrical piece with plenty of silent moments, and fantastic inside piano parts and contrabass clarinet, as Liudas confirmed, generated "frog" like sounds. "Part II" in contrast is mostly a "normal" piano solo improvisation in the style of Keith Tippett's "Mujician" recordings. The closing "Part III" is the
most abstract track with incredible effects and howl of Liudas, first supported and amplified by the inside piano explosions. Liudas leaves the stage for the more "traditional" minimalist piano fragment in the end fragments. If, as Alber Ayler said, music is the healing force of the universe, then this album heals like hell! 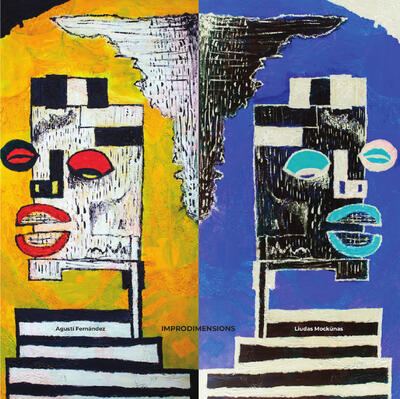