Guitarist Robert Andreano, originator of this project, recounts its story in very personal liner notes. While he was only 22, an opportunity arose to meet avant garde drumming pioneer Sunny Murray, who was to Andreano and bassist Bob Dickie—who completes the trio on this date—a legendary musician. This opinion was unfortunately not universally shared in the jazz world. Consequently, Murray was always looking for work and a recording was organized just a few days later, on Memorial Day 1994 in Philadelphia. Homework was released in 1997, in a strange lathe cut (records individually cut as opposed to pressed in batches) edition of 22 copies on translucent vinyl, a nod to the original pressings of Albert Ayler’s Bells, a classic ‘60s Murray session. The NoBusiness CD is an expanded edition dispensing with edits made to fit the music on LP (the vinyl is also being rereleased). The session sounds completely improvised, of the “let’s go in and see what happens” variety. And what happens is quite surprising: Murray’s main register here is not the free pulse he is known for, but grooves that tread binary grounds. Of course, Murray was not a session drummer and his breakbeat sounding approach on “Swell”, for example, remains highly unconventional. The younger musicians, bringing electric sounds and elements of non-jazz backgrounds, improvise with the respect due to such a figure, treading carefully. Although the session remains under a certain intensity threshold, they bring out those peculiar grooves unique to Murray’s discography and manage to find the right distance. Guitar carries echoes of Hendrix, often with beautifully nuanced attack. Murray notoriously disliked recording alone and the appearance of the nearly-20-minute solo “Why You Need a Lawyer When Your Pants on Fire” is another big surprise. It is a remarkable opportunity to listen to elements of the drummer’s classic style, as he goes into a fascinating interiorized dancing, anchored by his left foot hi-hat work. Murray was never in a position to organize his discography as a hall of mirrors in which to gaze at his own reflection. Homework documents a brief moment in his musical life, whose richness made it possible for it to be unique. The reissue is dedicated to the “beautiful memory of Sunny Murray”, who died two years ago this month. And beautiful it is indeed.

Drummer Sunny Murray really hit some wonderfully subtle, sensitive moments in the later years of his career – as you'll definitely hear here, working in a trio with Robert Andreano on guitar and Bob Dickie on bass! Both of the string players use their instruments in ways that are often textural – with Andreano creating slower waves of sound on his electrified instrument, and Dickie moving with careful energy alongside – which has Murray often using the drum kit in more open, spacious ways that resonate well with the other two musicians. 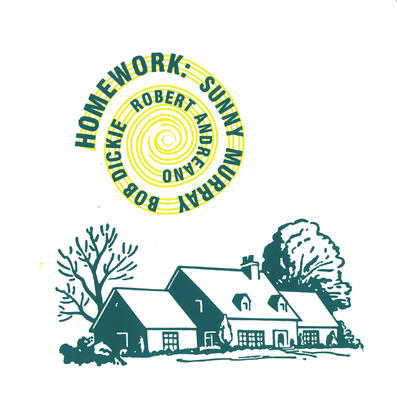