Another profoundly in-the-moment musician who has chosen an old-school format is British bassist Barry Guy. Referring by inference to experimental as well as advanced instant compositions, Five Fizzles for Samuel Beckett (NoBusiness Records NBEP 2 nobusinessrecords.com) is available as a 10-inch vinyl EP. Solo and only 14-minutes long, the program is as spacious and brutal as any of the Irish writer’s creations. Double stopping while pumping and pummeling his string set, Guy has created an autonomous salute where his single double bass creates more emotional resonance than exists in the author’s laconic works. Rappelling up and down his four strings at supersonic speeds, the bassist uses rasgueado and spiccato intensification in his playing, creating more resonance by vibrating a stick placed horizontally behind his strings. Besides attractive cross tones, belfry-like bell echoes and what sounds like wood rendered splinter by splinter, are heard. Finally on Fizzle V the concluding strategies reflect back on earlier tactics. Scrubbing every part of the bass, the climax combines pressure, pain and pleasure, with the coda a series of col legno whacks. Guy honors Beckett by expressing his own (musical) language.

The 12” EP is an under-used format in contemporary jazz, but it's ideal for solo statements like Barry Guy's Five Fizzles For Samuel Beckett. In 14 inspired minutes, Guy runs through a plethora of in-the-moment inventions. Each piece is based around a particular idea or instrumental approach: slashing bow work on 'Fizzle I', col legno (back of the bow) on 'Fizzle II;, alternately sensitive and jarring pizzicato on 'Fizzle IV', and so on. The results are remarkable, from the keening Easter European melodies and rusty hinge abstractions of 'Fizzle One', to 'Fizzle II's evocation of a gentle breeze blowing through a cane field. Masterful. 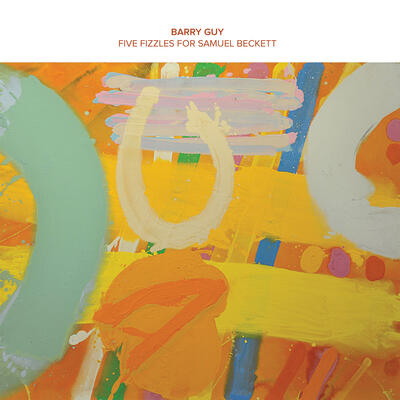