Emanation is the first volume of a projected series of recordings authorized by Sam Rivers’ estate. It is appropriate that it is inaugurated by a trio concert featuring Cecil McBee and Norman Connors, who performed on Streams, Rivers’ first outing for Impulse. This edition of the multi-instrumentalist’s trio would be eclipsed later in the ‘70s by the unit with Dave Holland and Barry Altschul, so this set at Boston’s Jazz Workshop, a full two years prior to Rivers’ breakout Montreux festival performance, is a reminder of the earlier trio’s longevity – it lasted into ‘74, when it was part of Impulse’s package tour with Keith Jarrett’s “American quartet” and Gato Barbieri’s Latin America ensemble – as well as its potency.

All archival projects are issued for the hard core; those weaned on gig cassettes with a scorching hot house mic will shrug off the distant bass and piano, because Rivers, McBee and Connors made compelling music even at this early stage of their run. At the beginning of each of the two sets, Rivers plays solo; tenor with dramatic sweep on the first, and soprano with folkish lilt on the second. He soon jettisons these materials, whipping up the intensity, beckoning the entrances of McBee and Connors. Depending upon the rhythmic feel Rivers cues as the performances unfold, Connors either finesses buoyant grooves or pummels the kit with a Graves-like urgency, while McBee races the fingerboard or lays down a surging vamp.

Rivers’ seemingly bottomless well of inventiveness is vividly on display on Emanation. Although he originally made his mark playing tenor, Rivers was a true multi-instrumentalist. Even at this relatively early stage of developing set-long improvisations in which he played each of his four axes at length, Rivers had a real command of each and every moment, the considerable merits of McBee and Connors’ contributions notwithstanding. If ever there was a recording that handsomely rewards committed listening, it is Emanation.

Sam Rivers’ Impulse! debut, 1973’s Streams, featured a 49-minute performance from that year’s Montreux Jazz Festival with a trio of bassist Cecil McBee and drummer Norman Connors. The group was in full free improv mode from start to finish, pulling out all the stops from the crashing drum intro to the finale, which managed to be slow and explosive at once. Although it was a continuous piece of music, it moved through multiple stages, mostly signaled by Rivers—who died eight years ago this month—switching instruments, from tenor saxophone to flute to piano to soprano. Four earlier performances by the same trio, recorded in February 1971 at the Boston Jazz Workshop, were released on the 1975 album Hues, which has regrettably never been reissued, and another three-minute fragment from Montreux popped up on the 1978 compilation The Live Trio Sessions, also terminally outof-print. And that was it as far as documentation of this wild, adventurous group…until now. Writer and scholar Ed Hazell and NoBusiness label owner Danas Mikailionis have arranged with Rivers’ daughter Monique to release eight archival recordings, of which Emanation is the first. Recorded on Jun. 3rd, 1971 at the Boston Jazz Workshop, it’s another totally unfettered performance, divided into two sections, the first running just over 31 minutes and the latter slightly more than 45. Things get started right away: Rivers calls the meeting to order with an unaccompanied tenor fanfare and McBee and Connors quickly settle in behind him, the drummer hammering the kit hard as the bassist, unfortunately under-mic’d, goes his own way and does his own thing. By about five minutes in, things settle down somewhat and the trio, McBee much more audible, is actually swinging, not that far from what Rivers was able to accomplish as a short-lived member of Miles Davis’ quintet in 1964. During the course of the performance, Rivers moves from tenor to flute to piano to soprano, just as he did on Streams and, while he’s at his best when playing the tenor, nothing here is boring or dismissible. Emanation is a crucial addition to the Sam Rivers catalogue.

A tremendous lost performance from the great Sam Rivers – working here with an ultra-hip trio that features Cecil McBee on bass and Norman Connors on drums! The style is in that free, longform improvisation mode that Rivers hit as the 70s began – often quite spiritual in nature, even when fierce – with the leader handling some really great tenor, plus soprano sax, flute, and even a bit of piano! Norman Connors will come as quite a surprise to those who only know him from his soul-based work later on in the 70s – as he plays with a hell of a lot of power, and really drives Rivers on with his boundless energy on the drum kit. McBee is fantastic, as always – often more understated than most might be in his position, but always hitting the right spirit for the moment. If you're a Sam Rivers fan, there's plenty to love here – and the set's a completely essential additional to his catalog. 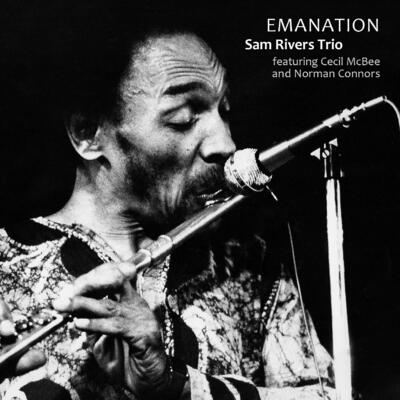