Detail is a free jazz super-group that somehow never quite gets its due. The group formed in 1982 when drummer John Stevens and bassist Johnny Mbizo Dyani visited Norway to tour and record in a quartet with keyboard player Eivin One Pedersen and reed player Frode Gjerstad. Pedersen ducked out as they were getting ready to go into the studio and the group settled in as a trio. The group lasted a bit over a decade (with Kent Carter stepping into the bass spot with Dyani’s death in 1986) and released a scant 10 recordings, most now out of print. The Lithuanian label NoBusiness has stepped in to help with that, reissuing one of the trio sessions from that initial meeting, originally issued as Okhela <<To Make a Fire>> on the Affinity label.

While various musicians, including Bobby Bradford, Billy Bang, and Paul Rutherford guested with the group, the core trio and particularly the early trio with Dyani was a noteworthy setting for each of the members. Here, Stevens draws on his jazz roots, opening up pulse and swing and driving the music with a lithe sense of momentum. From his central role in the formulation of South African free jazz to his participation in and leadership of various groups in Europe, Dyani was a singular voice on bass. His stalwart tone and loping melodicism was integral to the partnerships he forged. Gjerstad was the youngster of these sessions, still formulating his fiery attack and darting, energized lyricism. This set captures the trio after several weeks of touring and a previous day of studio recording and, over the course of two extended improvisations, they dive in with a honed, collective passion.

The recording quality and remastering are stellar, with every detail of each of the players captured with remarkable clarity. This is particularly true of Dyani, with a full, resounding bass sound that sits perfectly in the mix. Stevens is credited with balancing the recording in the studio and his efforts pay off. Gjerstad sounds a bit raw at times, but holds his own, knowing when to dive in and when to sit back and let his partners stretch out. And Stevens is in his element, slashing and splashing his full kit, goading the music along without ever playing over his partners. What is striking about this is how egalitarian the interactions are within the context of a reeds/bass/drums trio, a free jazz setting that was well established at this point. The musicians know how to incite the energy of the set without ever overpowering each other. The packaging and remastering is fantastic here and Gjerstad’s reminiscences in the liner notes add valuable context to the set. While not the definitive recording of the group, it’s great to have this one back in print.

Less brash and all-encompassing, but as remarkable a session recorded in Norway in 1982 is Detail Day Two (NoBusiness Records CD 114). The first trio iteration of that long-running group, it also demonstrates the pan-nationalist ethos of Free Music. That’s because this multi-layered, intricately balanced 42-minute improvisation was created by Norwegian saxophonist Frode Gjerstad, British drummer John Stevens and South African bassist Johnny Dyani. Practiced and matured in his percussion skills, the drummer never takes a solo, but allows his rattling drum tops and singing cymbal lines to intuit the rhythm so that the beat appears inevitable. Dyani, who had long established himself in Europe, boomerangs from volleying consistent plucks, which help push forward the narrative, to intricate stretches, picks and pulls to pinpoint individual string pressure or suction as he solos within his rhythmic functions. Adapting to this barrage from the bottom, Gjerstad starts off with tongue wiggles and intensity vibrations radiating from soprano saxophone, and as the exposition become more pressurized switches to the deeper-toned tenor saxophone. Moving up from breathy snorts his growling ghost notes and palindrome vibrations sound at various speeds and pitches to parallel Dyani’s strums and later bowed buzzes. Slowly, during the sequences second section, the saxophone digs deeper into the theme and exposes all of its possible variables as he’s doubled by ricochets from the string set, with Stevens’ press rolls and bounces providing controlling and comforting accompaniment. Variations explored from all side of the sound triangle, spidery fingering, positioned reed smears and drum clatter cease at the appropriate moment, never climaxing, but suggesting further trio explorations lie ahead.

This session comes from October 1982, just the second day that Gjerstad and drummer John Stevens had played together as a trio with bassist Johnny Mbizo Dyani, the brilliant South African exile. The two tracks (recorded with an LP in mind, the first 22’30, the second 20’22”) present a band with a rare stylistic onsistency. Stevens, whose exercises for improvisation can sometimes reduce music to pure expressive gesture, is generally spare, though in ‘jazz’ mode, while Dyani plays with a corresponding clarity of thought, often achieving the most intimate cello-like tone. From the outset the two establish an open ground, a calm rhythmic field for Gjerstad’s intensity. He enters with a taut, intense soprano saxophone line before focusing on tenor. While Gjerstad’s personality on these horns may not have the acutely personal voice he would later develop on alto saxophone and clarinet, it’s hardly heard as lacking. He can be a forceful, emotive soloist, his lines coiling against the detailed calm of the rhythmic fields generated by his partners. The finest moments come on the second track, when Gjerstad enters a sustained ballad mood, Dyani coming to the fore and Stevens further opening time’s vista. 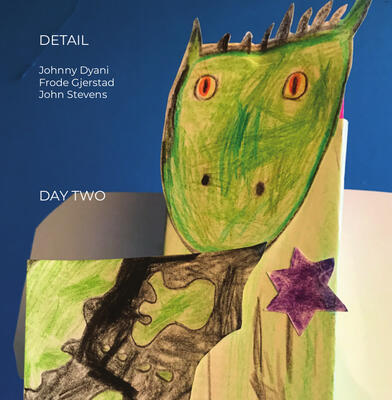