After just four years of activity, Lithuania's No Business Records already boasts a catalogue of nearly 50 releases, ranging from the impressive to the essential, and this latest batch of No Business LPs continues the label's practice of releasing the work of major players alongside less well-known improvisers. French alto and baritone saxophonist Daunik Lazro has performed and recorded frequently with multi-instrumentalist Joe McPhee, and it's no wonder that the two players have such an affinity for one another. Like McPhee, Lazro's solo music is bred from wayfaring solitude (as the recent Ayler solo baritone CD Some other Zongs– see review below – attests), and it can bleed into his group work as well. Curare is a slightly different beast, presenting Lazro in a trio with Parisian guitarist Jean-François Pauvros and English percussionist Roger Turner on four collective improvisations. The opening "Morsure" builds from low, breathy pops and nattering cymbal work to bulldozing gestural swoops, Pauvros' curling strums and charged obsessiveness stoking the fires in his mates' lungs and forearms. "White Dirt" finds the guitarist coaxing queasy vocal wails by bowing the head and neck of his instrument, with baritone and feedback droning underneath while Turner builds pattering waves into localized explosions. Lazro seems to favour drummers (or, rather, musicians) who use a stripped-down approach to create monolithic tension – Turner's seismic displacement is an extension of Sunny Murray and John Stevens, and Pauvros also directs simple actions into voluminous, garish areas. Switching to alto for the final piece, "The Eye", Lazro emits high-pitched squeaks and crumpled calls over a latticework of shimmering electricity and delicate concentration, as warped glissandi and percussive churn build to an intense driving hum.

All of its members have been plying their trade in this gene since the 1970s, French baritone saxophonist Daunik Lazro with the likes of soprano saxophonist Michel Doneda and bassist Joëlle Léandre; fellow Gaul, guitarist Jean-François Pauvros with everyone from drummer Makoto Sato to harpist Hélène Breschand; and British percussionist Roger Turner with seemingly every advanced sound explore in the United Kingdom, North America and the Continent. Never before have they recorded in trio formation and the four tracks hang together so well because of another contradiction: each cooperates fully with the others, but no one alters his individual style.

The most extensive instance of the trio’s concordance is on the nearly 19-minute “En Nage”, which precedes the surprisingly lyrical conclusion that is “The Eye”. On “En Nage”, juddering crunches from Pauvros detonate in staccatissimo time as Lazro’s vibrating blats turn to reed mastication and renal grunts. As the front men jockey in sequence, exposing narrowed and tightened multiphonics from the saxophonist plus disconnected waves of flanged twangs from the guitarist, Turner shouts encouragement. More importantly he also manipulates cymbal crashes, rim shot clatters and bass drum thumps to underline their parts and fit the improvising into broken-octave patterns.

Anything but a muscle relaxing, the Rx prescribed by this musical team provides appropriate sonic exhilaration. 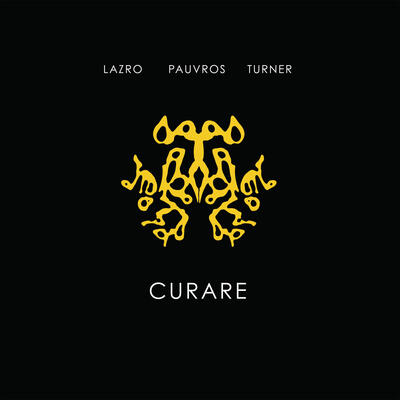