Brain in a Dish

We sometimes forget the power of Steve Swell on trombone – then along comes a record like this, which helps us remember all over again! Swell bursts out of the gate with this fantastically dirty tone – a way of rasping up his notes while still stating them with great focus – driven on by the powerful drums of Michael Vatcher, and peppered with shots on both piano and organ from Robert Boston – a trio that can come on with great power at some points, then hold open a more spacious gate to sound at others. Swell's tone is bracing and original throughout – and titles include "Psychopath In A Church Pew", "New Use For Old Neurons", "Brain In A Dish", "Just Another Alogism", "Tastier Than Oranges", and "Fried Or Roasted"

This is a fine trio outing with the highly compatible Robert Boston on piano and organ and Michael Vatcher on drums. While the group plays tightly with strong synchronicity, the focus, for the most part, is on Swell who, unsurprisingly, is stellar. Those who have watched the trombonist’s evolution through the years will be particularly pleased with the range of his performance on this recording. The 11 tracks are fully improvised. The title opener strikes early, Swell’s rough-hewn splats, swooshes and bursts covering much of the horn’s range. He is in good form as he dips and bends, curves and strikes, machine-gun-like patterns nterspersed among little sounds. Vatcher adds a strong kick while Boston lightly fills in the holes. On the following “New Use for Old Neurons”, the latter switches to organ, his classical training contrasting with Swell’s slick lines. “Feed Me” and the closing “Psychopath in a Church Pew”, each with their overpowering sounds, drive triumphantly, Vatcher coming to the fore and Boston offering delightful, quirky bursts on the latter. Swell is particularly impressive on these pieces, his distinct growls and jagged clusters a trombonist’s delight. Swell alters his tone with mutes on “Tastier than Oranges”, “Trepanation Trepidation” and “How Do You Like Yours?” while on “Fried and Roasted?” he toys with swooshing plunges, toy sounds and blubber notes, while Vatcher lays low before becoming an aggressive foil. Boston serves softballs on organ on “Neurons”, over which Swell swerves and splats deliciously like a drunken sailor. Brain In A Dish could just as easily be called “The Many Sides of Steve Swell”, as the recording capitalizes on many of the extended techniques of which he is a master. It will satisfy his fans and, due to its diversity, is also a good entry point to his music. 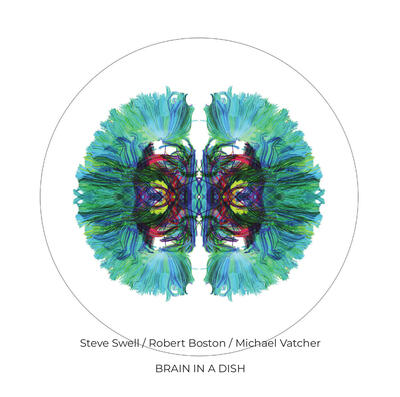