Side A
BLUE CAT - PART I

Though not specifically billed as such, this archival release from NoBusiness captures a recording from a 1991 UK tour of the group Detail in a quartet formation with cornetist Bobby Bradford, alto player Frode Gjerstad, bassist Kent Carter, and drummer John Stevens. Bradford first played with John Stevens’ Spontaneous Music Ensemble when he traveled to London in the summer of 1971 (documented on a great Nessa recording) and played with Detail (Gjerstad, Stevens, and bassist Johnny Dyani) on a short tour in 1986 shortly before Dyani’s death. By the late 80s, bassist Kent Carter had been recruited to the group which continued until Stevens’ death in 1994. That later version of the group didn’t record much, making this recording all-the-more valuable.

Over the course of three extended pieces, the four stretch out with the type of freewheeling, open-pulse, collective improvisation they all relished. Gjerstad and Bradford are effective foils for each other, a partnership they’ve continued to mine over the years. The two grab on to free melodic themes and spin them with loose, spontaneous lyricism. Bradford’s warm, round tone meshes well with Gjerstad’s lithe angular phrasing. Carter honed his ability to propel open thematic improvisation most notably in his extended tenure with Steve Lacy, and his driving lines galvanize the music throughout. And, as usual, Stevens’ spontaneous, dynamic sense of free momentum thrusts the quartet along with pliant energy. What really stands out here is the way the four effortlessly coalesce into a collective unit. Lines are seamlessly tossed back and forth between Bradford and Gjerstad as Carter and Stevens spur things along with supple energy. The vibrant fluidity of the playing is outstanding throughout, full of taught intensity and potency.

Each of the players gets plenty of solo space which they make the most of. But it’s how they navigate their way through the pieces together, moving in and out of synch that really energizes the set. The theme of the second piece is reminiscent of Ornette Coleman, someone Bradford spent time working with, and the way the quartet structures their playing has an affinity with the early ‘60s Coleman quartet while still sounding completely unique. This documents a previously undocumented grouping at a point where Detail wasn’t recording much. The recording quality has a clear presence and everyone is nicely balanced, particularly considering that it was captured live. All too often, these sorts of archival finds have some historical interest, but are really for completists. Happily, this is far from the case with this set which still sounds vital almost three decades later.

This CD is half a concert, the other half is forthcoming. Coltrane being Coltrane, it could be a quite different, more introspective CD – who knows? Those two Tyner piano solos flow so very gracefully and imaginatively are two more reasons this album really should be heard.

This June 1991 recording from a London club combines California-based cornet player Bobby Bradford with Norwegian saxophonist Frode Gjerstad, expatriate American bassist Kent Carter and late English drummer John Stevens (who would have turned 80 this month). It’s a quartet of long associations, reaching back 20 years to Bradford’s 1971 appearances with Stevens’ Spontaneous Music Ensemble and ten years to the formation of the trio Detail, which began with Gjerstad, Stevens and bassist Johnny Dyani in 1982 and which had consisted of Gjerstad, Stevens and Carter since 1987. Most notably, there’s a 1986 recording, In Time Was, from the Bracknell Jazz Festival of a Detail quartet with Bradford and Dyani, released on Gjerstad’s Circulasione label and currently available on Bandcamp. One can stretch associations well past the date of this recording as well: Bradford was appearing with Gjerstad’s improvising orchestra Circulasione Totale at least as recently as 2011. Clearly there are special musical relationships here, with Stevens the linchpin, an energetic, explosive drummer possessed of a raw, engaged creativity. He’s able to spur the band into a different direction with a sudden flurry. Bradford and Gjerstad are both lyrical players, but sharply contrasting ones. Bradford practices a defined melodic clarity, to the extent that even his solos here can resemble theme statements; Gjerstad lines, in contrast, are dense multi-directional events, filled with mutating, speech-like tones. There are strong ties for each to the music of Ornette Coleman, Bradford’s through long association and Gjerstad’s through early influence, though here his phrases have a lively convolution all their own. Carter, a fluid, responsive bassist, suffers in the mix here, but is still a key element, knitting parts together. The LP presents three pieces. The first, 23-minute “Blue Cat 1”, is the most developed, beginning at a dirge-like tempo with Bradford’s strongly melodic playing matched by Gjerstad’s weaving clarinet-like counterpoint. As the extended collective dialogue develops, Bradford’s relatively laconic voice dovetails with Gjerstad’s burbling, bending lines. The two relatively brief pieces on Side 2 emphasize Bradford’s literal tunefulness, a reminder that many of his key partnerships have been with composers: Coleman, John Carter and Hafez Modirzadeh. “Blue Cat 2” sets elements of a hardbop blues in the language of collective improvisation while the concluding “Blue Cat 3” moves between collective improvisation and a defined but fragmented tune carried by Bradford. It’s fascinating, simultaneously developing contrasting perspectives. 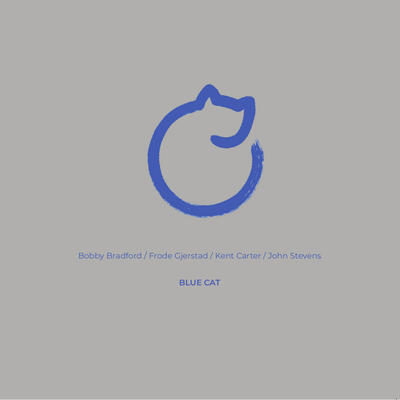