This release contains never earlier released Survival Ensemble session from 29th May, 1977 recorded at A Day of Solidarity with Soweto in New York City. Also a 40 pages booklet with essay written by Ed Hazell about the Survival Ensemble, original flyers, photos, etc.

Violinist Billy Bang made his recording debut as a leader with the Survival Ensemble, the first working band he ever led, on New York Collage in 1979. Bang, saxophonists Bilal Abdur Rahman and Henry Warner, bassist William Parker, and percussionists Rashid Bakr and Khuwana John Fuller played incendiary free jazz more clearly indebted to the New York avant-garde of the preceding decade than any album Bang would record again. The music’s urgency and passion arose from the exhilaration of artistic self-discovery shared by everyone in the group, and the intensity of their need to express their feelings. The albums really are a loft era classic. Proudly flaunting its New York roots, it insists that music based on the innovations of Coltrane, Ayler, Taylor, could grow in new directions, absorb new influences, and engage contemporary political realities.

The late, great violinist's first two albums -- the first so obscure I missed it when I assembled a discography for my 2005 Voice piece on Bang. A quartet for the first record, with Bilal Abdur Rahman on tenor and soprano sax, William Parker on bass, and Rashid Bakr on drums. Rahman, an old friend of Bang's, picked up Islam in prison and recorded reluctantly but more often than not his cutting and slashing is terrific here. Both albums are hit and miss, with bits of spoken word spouting political critique -- "when the poor steal, it's called looting; when the rich steal, it's called profit" is one turn of phrase. Second album adds Henry Warner on alto sax and Khuwana Fuller on congas -- Warner's another player who shows up on rare occasions but always makes a big impression. Way back when I would probably have hedged my grade, seeing each album as promising but half-baked, but now they're indisputable pieces of history -- and not just because Bang and Parker went on to have brilliant careers. Also note that the label in Lithuania that rescued them cared enough to provide a 36-page booklet on the era and this remarkable music.

On May 16 1978, at Columbia University’s WKCR’s studio, Billy Bang set down his first recording as a leader, a brittle, spiny collage of new-jazz and verse, credited to his Survival Ensemble. Exactly a decade earlier, he was in Vietnam, a tunnel rat with the infantry, just about to get stripes and a citation as the Tet offensive degenerated from adder-bite suddenness into a lunatic moil of broken fronts and local campaigns that would have seemed confused even by Thirty Years War standards, but which were singularly out of place in an age whose signature ambition was to put a man on the moon. Bang (né William Walker) attempted to exorcise his demons in Vietnam: The Aftermathand Vietnam: Reflections, two of his least successful recordings, though their “failure” may be as much critical perception as creative lapse, for it is virtually impossible not to psychoanalyze that music after the fact and project into it every liberal and illiberal datum available to us about America’s war and its political, psychic and karmic fallout.

It had always seemed to be, even before The Aftermath and Reflections came out in 2001 and 2004 respectively – and on a Canadian label! – that what happened to Bang in Vietnam, not to belittle the intensity or trauma of that experience, was less significant to him as an artist than what happened since he shipped out and returned to the US. He didn’t need Sun Ra, a one-time employer and a frequently overlooked influence on the violinist’s music and career, to tell him that if warfare is 99% boredom and 1% sheer terror, arguably recalibrated in Vietnam to 50% grinding anxiety and 50% morbid self-indulgence, then life as a African-American in Fortress USA was likely to be compounded of equal parts alienation and rearguard community spirit. Bang’s life and work after 1968, recounted by Bill Shoemaker on the TUM release and more fully by Ed Hazell on the NoBusiness archive release, has an Ellisonian logic. Walker’s considerable intellect – which I found to be unexpectedly analytical when we met, not because I didn’t expect logic from a black man, but because I didn’t expect exegesis from someone who played like Bang – and his finely tuned, or attuned, awareness of social class and socio-economic positioning gave him a perspective on jazz music that makes the title of the posthumous TUM release with Joe Fonda and Barry Altschul seem all the more apposite.

After demob, Bang gravitated to the Basement on East 6th St on the Lower East Side, a fraternal meeting place that seems to have been quite different from better known performance spaces like Studio RivBea. The Arkestra was in quarters not far away. With a kid to support, Bang found himself shoveling coal in another basement, Richard Wright joining Ralph Ellison in the back-story. Politically, the place was a ferment, but with the muddled attitude to legitimate social action that one always finds in a nation at war. Bang had been kept out of a bank heist by a member of the gang, Clive Hunter, who became Bilal Abdul Rahman under the prison influence of the former H. Rap Brown, and then became the musical heart and moral centre of the Survival Ensemble, a saxophone player whose raw presence and ineluctable logic has something of the madrassah about it. He’s the revelation here. Where Bang skitters around on top, the one-time tunnel rat always eager for air and light, keen to exercise his poetic voice, it’s Rahman and the adamantine William Parker who give the music its gravitation.

A small version of the Ensemble, also with Rashid Bakr on drums, but minus the second saxophone of Henry Warner and the additional percussion provided on New York Collage by Khuwana Fuller, was recorded at a Soweto “day of solidarity” in May 1977, a full year before the “official” album was launched. It occupies the first half of the NoBusiness set, dominated by a sequence steered by Parker and very much fired by anger at the attrition of creativity in the jazz world, symbolized by the death of Albert Ayler. 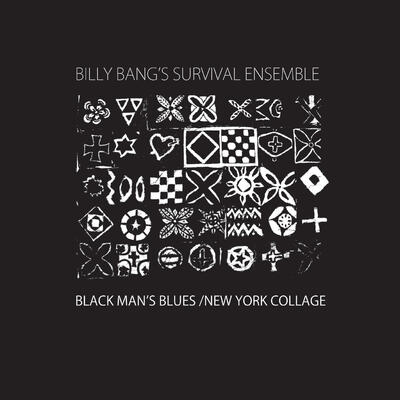