Barry Guy decided to name his latest solo album after Comet (1998), a screenprint by Albert Irvin (1922—2015) part of which appears on the cover. The British double bassist has previously used works by his fellow countryman as the album art for releases on his Maya label and the solo, 10” EP, Five Fizzles for Samuel Beckett (NoBusiness, 2014). Irvin was a British artist who created an extensive body of abstract paintings, watercolours, and prints. His mature work has its own very particular sense of dimension and depth, achieved through gestural mark-making and luminous hues set against one another in chromatic vibration. He often worked on a grand scale, but also created smaller, more intimate works which function like a microcosm of his large-format paintings. Irvin “epitomised the idea of art as the expression of the life force within the space of the image,” The Guardian wrote in its obituary. His motifs were abstracted from the urban environment about him and as a result archetypal structures came to the fore. In the early 1970s he turned to acrylic instead of oil paint, which led to denser, more vivid layering and the pulsating grids of colour and calligraphic shapes that spread across his canvases, likened by Irvin himself to music.

Barry Guy’s artistic approach has aspects in common with Irvin’s. Dynamic structures and intense sound colour are at the centre of his solo output; his use of the double bass’s physical potential includes several extended methods like rattling bows, sticks, and brushes. As expected, in this performance from 2019 there are elements which strongly characterise his music: notes that buzz around like flies on cocaine (the beginning of “Comet”); nervous trills accompanied by long overtones (“Oscillating”), that seem to add another dimension to the piece; Phrygian shifts in combination with harmonics reminiscent of flamenco music (“Closed Space”); and beautiful glissandi, which he counteracts with short, dancing notes and slapped chords (“Ding Dang A Dingy Dang”).

So far, nothing new. Convincing improvised solo sets need to have an idea of where the music is to go however, and of course Guy has one. His unique sense of form, sublime tone, and harmonic imagination take us on a gradually unfolding trip. The music seems to be in search of something as it turns in one direction, then another, and finally leads us to a goal – in this case, “Old Earth Home”, a piece that dances around a joyful rhythmic riff. Rarely before has Guy sounded so light-hearted, so easy. The piece has the appeal of traditional British folk music, as if the sun’s come out at the end of a cloudy day. After that the music flows into a kind of coda (“Barehead”) which concludes the set. 43 years after Statements V-XI for Double Bass & Violone (Incus, 1977), Barry Guy continues to push the solo double bass genre into fresh, exciting territories. Irvin’s Comet is highly recommended.

Mark Corroto - All About Jazz

The old joke about people finding it appropriate to talk at a concert or club during the bass solo has never applied when Barry Guy is onstage. For over 50 years, his performances have always been riveting, be it in the trio format with Evan Parker and Paul Lytton, his London Jazz Composers Orchestra, the Barry Guy New Orchestra or his Baroque and new music performances. Like his fellow bassists Joëlle Léandre, Barre Phillips, William Parker and Peter Kowald, it is nearly impossible to separate the corpus of the instrument from the performer. This live recording from October 2019 in Vilnius, Lithuania, is available as an LP edition or download. It connects back to Guy's LP Statements V-XI For Double Bass & Violone (Incus, 1977) and Fizzles (Maya Recordings, 1993), another solo outing. From the turbulence of the opening "Comet" to the new music explorations of "Ding Dang A Dingy Ding Dang," the bassist explores—maybe more accurately exploits—his instrument's physicality. Guy, playing solo, sans overdubs, can sound like an entire band, sometimes utilizing his patented arco and pizzicato techniques simultaneously. "Oscillating" vibrates with bowed energy, sounding like an electronic intervention. The final two tracks, "Old Earth Home" and "Barehead," travel from gossamer chamber music to a punk demolition of sound.

Cecil Taylor once remarked, “If I was a bass player, I would want to be Barry Guy.” It is hardly a self-effacing remark, for Guy’s commitment to the near-impossible—tempo, density, complexity—seems like homage to Taylor himself, or to the late Scott LaFaro, Guy’s nearest predecessor in stretching the bass’ limits. There are parallels, too, with circular breathing multiphonic collaborators Evan Parker and Peter Evans. Technique for technique’s sake? Hardly. All artists try to gather the materials needed to realize their visions; some just need more. Recorded in October 2019 during Improdimensija at MAMAstudios in Vilnius, Irvin’s Comet alludes to the cover art, the painting “Comet” by the late British artist Albert Irvin, a work that may have suggested a comet’s transit but also presents abstracted parallel figures in contrasting colors and patterns. In the arco brilliance of both “Comet” and “Silence”, dense tapestries of bowed and plucked notes combine with sharp contrasts in volume, achieving a multiply-coded presence. Further, floating amid the upper register mysteries of “Comet”, it sounds like a theremin could have been set loose among the strings. There is often a sense in Guy’s work of how much could be accomplished, registered or tested within a limited amount of time, how many techniques may be rapidly alternated to create another state of musical mind. That quest for expression can be as joyous as it is darkly mysterious. “Ding Dang a Diggy Ding Dang” may seem unlikely here, wittily reimagining as it does the bass as a different kind of rhythm instrument; instead of a walking bass, it is a fretless chordal instrument, a rhythmically charged, idiomatic composition filled with sliding chords suggesting acoustic bluesmen with William Parker and/or Chuck Berry lending a hand. “Old Earth Home” is a pizzicato lament, a work as emotionally direct as one could imagine, suffused with specifically Spanish passions. Heir to Narciso Yepes or Charles Mingus, it moves from the dark intensity of minor modes towards the playful light of the major. The concluding “Barehead” is a maelstrom of bowing and plucking, energized runs and pinpoint lights amid upper-register harmonics, plucked chords and bowed frenzy. Fully appreciating Guy’s performances requires the visual component. It ends nagging questions about how he is accomplishing one thing or another, even while hands and mind remain quicker than the eye. Meanwhile, Irvin’s Comet is a good stand-in. 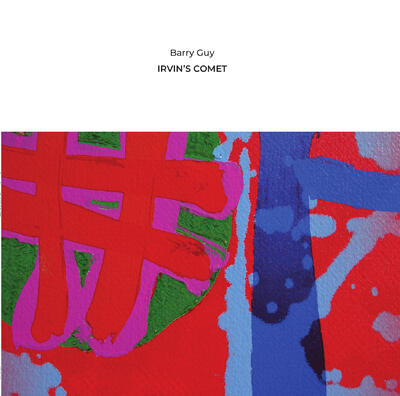