Side B
SONG FOR SAKAMOTO KIKUYO (PART III)

In the light of the recently discovered ‘lost’ recordings by such jazz legends as Thelonious Monk, Charles Mingus and John Coltrane, this freshly unearthed recording featuring the fire music of Japanese saxophone player, the late Karou Abe, is an equally exciting find. Recorded live in Tokyo at two separate locations, Mannyoka is an important addition to the discography of Japanese free jazz, at a time when European and American musicians like Derek Bailey, Peter Brötzmann, and Milford Graves were travelling to Japan in order to perform and record with new players. Here Abe is joined by drummer Sabu Toyozumi who provides the perfect accompaniment for the sax player’s guttural blasts and minimalist skronking. A duet that screams forth one minute, only to slowly recede into near silence the next. The resulting exchange between the two players is tense at times, broken only by a feral fiery salvo from Abe’s blaring horn.

After years of delicate polishing and marketing, some discographies resemble the bronze statues enshrining historical figures in the urban landscape. Japanese free jazz saxophonist Kaoru Abe’s discography would be more akin to an untamed mythical beast. Nearly entirely posthumous and insular, it includes a ten-disc solo set, an extensive CD-R series recorded in Fukushima and one of its most heralded releases, Winter 1972, existing only as a 500-copy bootleg. Mannyoka is two previously unreleased sets recorded in 1978, the year Abe died of an overdose of sleeping pills at 29 (he would have turned 70 this month). Both feature “Overhang Party”, Abe’s duo of the final year with drummer Sabu Toyozumi. The two sets, recorded by an audience member, showcase very different sides. “Song for Mithue Toyozumi” probes the realm of  quiet intensity, without ever resorting to the usual tricks of low-volume playing. Toyozumi encircles the bursts of harsh tone coming out of the saxophone, delimiting a perimeter that progressively shrinks toward near silence. It is not easy music, but points in the direction of an untrodden, mysterious path. In “Song for Sakamoto Kikuyo”, through speed, precision and power, the pair construct a towering mass of intense sound. Even in a musical context, sound remains a physical phenomenon: the hardly understandable, relentless interplay builds up such an amount of pressure the sound mass actually seems to bend, where less complete musicians would have been left with shattered fragments of broken noise long ago. Something in the cover’s white background, framing a picture of Abe as a child in postwar Japan, brings to mind the great Improvising Beings label. It is therefore no surprise to discover that the deep liner notes have been penned by Julien Palomo, founder of that label. Mannyoka manages to add to the sprawling Abe discography and makes sense, pointing toward yet something else to hear in the late saxophonist’s music. In the mastered creation lies the answer to the question of why Abe left such a mark on those who heard him. 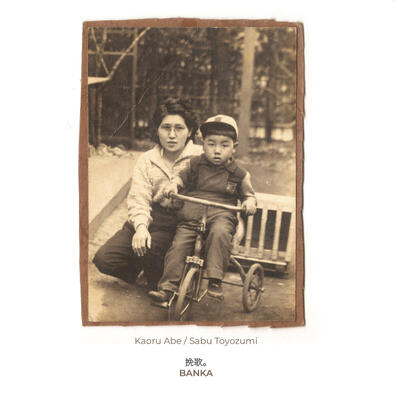