Osvaldas Balakauskas (b. 1937) is one of Lithuania’s most prominent modernist composers, whose authority and musical influence have shaped generations of composers since the 1970s. His ‘excessive’ interest in jazz and other ideological ‘sins’ put him on the radar of the Soviet authorities, which was a rather dangerous predicament to be in, both professionally and personally. Seeking refuge, he moved to Ukraine in 1964, where he attended Kiev Conservatory, and decame involved with an underground circle of avant-garde composers. Balakauskas’ return to Vilnius in 1972 disturbed the Lithuanian musical landscape. He was attacked for his ‘formalist’, ‘cosmopolitan‘ and ‘emotionally detached‘ musical style. To the authorities and conservative-minded colleagues, his music seemed strangely abrasive, at times simply because of the inclusion of a prepared piano, amplified cello or reversed tapes, techniques that today are hardly associated with selfish experimentation or disregard for listeners. Nevertheless, to artists and listeners who were weary of the propaganda-driven aesthetic ideals, Balakauskas’ music offered a breath of fresh air, and allowed for a vision of a new and independent repertoire of creative possibilities. As one of Lituania’s most prolific composers, Balakauskas developed a unique and personal voice, described in his theoretical treatise Dodecatonics. Edited by Krzysztof Droba and first published in Krakow in 1997, this volume outlines the underlying principles of his creative work, and demonstrates his original views on the canon of Western music, with its inner working mechanisms and psycho-acoustic logic. Balakauskas’ impeccable argumentation and meticulous analyses place it on a par with the great treatises by Paul Hindemith and Olivier Messiaen. Dodecatonics is Balakauskas’ unique approach to the 12-tone sound array (traditionally referred to as ‘chromatic’), where new diatonic connections between the 12 tones of the chromatic scale (or selected parts of it, from one-tone monotonic to 12-tone dodecatonic) are formed and developed. He extends the notion of a scale (when it is used as a tone row) to include as its elements not only single notes, but also some groups of notes, a chord or motif, or even an entire, stylistically characteristic fragment of previously composed music. The resulting sonorities create a distinct and instantly identifiable harmonic palette, often referred to as ‘Balakauskas tonality’. The underlying rhythmic substratum is based on mathematically determined progressions and symmetries. Akin to the rhythmic structures of Boris Blacher, the rhythms oscillate between accumulating and releasing energy. In his music, Balakauskas does not use strictly calculated structures just for the sake of theoretical exploration. Instead, he employs them to create stylistically recognisable soundscapes, at times resembling Neobaroque, Neoromantic or Neoimpressionist aesthetics, some being reminiscent of Medieval plainchant or jazz. His system allows him to borrow from many 20th-century compositional techniques and genres, which at some point in his creative career he has explored to varying degrees, including controlled aleatorics, sonorism, minimalism, electronic music and even collage. String quartet is one of the genres which reflect different stages of creative evolution of Osvaldas Balakauskas. This CD includes the premiere recordings of his First and Fourth quartets – it is the first time they are presented to the audience, never having been publicly performed before. The First Quartet, written in 1971 (so it awaited its premiere for almost a half of a century!), apparently points to the still progressing search of his own style. Brimming with abundant aleatoric and sonoristic effects and youthful energy, this opus evokes the moments from his studies at the Kiev Conservatory (1964-1969), when his like-minded fellow students eagerly studied new Western music, gathered to listen to and discuss the different instances of it which they managed to access through the Iron Curtain. In the Second Quartet, composed in the same year of 1971, Balakauskas first used a principle which became important for great part of his later music: in the first movement the element of the tone row is not a single tone but a short melodic formation, diatonic descending sequence of the great second and minor third, which imparts some tonal colours to the serial fabric. In the third movement, the latter is furthermore disturbed by the C-major triad, appearing out of the blue and ‘insistently’ repeating – looking like a game with elements of stylistic collage, otherwise not so characteristic of this composer. The Third Quartet was written in 1998 on commission from the Silesian String Quartet. Its sonic material is based on the scale of eleven tones (hendecatonic) – so it is almost a complete chromatic scale, but here the composer continues exploring the inner diatonic potential of and obtaining the quasi-tonal sound from it. In addition, here the character of melodic and harmonic figurations as if coincidentally evokes some parallels with jazz. Or better to say, the composer turns back to his past favourite music: such allusions keep recurring in his work increasingly since the middle of the 1990s. In the Fourth Quartet, composed in 2004, the composer further polishes his system of musical language invented decades ago and continues, we may say, the ‘Neoclassicist’ period of his oeuvre. However, among his music of this late period, this quartet is distinguished by the intensity and variety of the musical process. It is a quite challenge to the performers and possibly his most monumental work of this genre, not only in regard to its duration. The Fifth Quartet of 2012 is dedicated to the Chordos Quartet. In regard to its form, this work is somewhat more homogenous. However, here the composer still draws the distinct trajectory of the musical process, juxtaposing different models of rhythm and types of texture: in the outer sections the pace of music is deliberately suspended over and over again, while in the middle section counterpoints of rhythmically more flexible motives prevail, instilling a feeling of free and dynamic, quasi-improvisational flow of music. 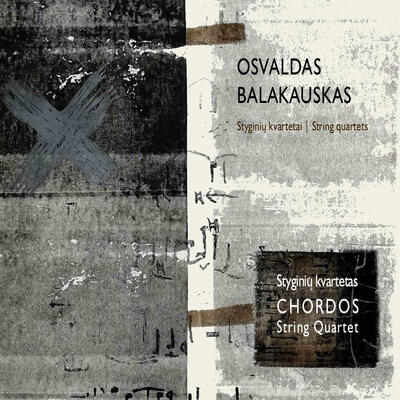